Track the Path of Hurricane Irma as It Barrels Toward Florida

Hurricane Irma has wreaked havoc on the Caribbean after slamming though the area Wednesday and Thursday. The Category 4 storm is tracking to hit Florida by early Sunday morning, according to the latest projections from Irma’s models.

Irma, which became one of the strongest Atlantic hurricanes on record earlier this week, has killed at least 16 people, left more than 1 million without power in Puerto Rico and damaged almost all buildings on the island of Barbuda, the Associated Press reports. The storm brought heavy winds and rainfall to eastern Caribbean islands early Wednesday and then hit Puerto Rico and the Virgin Islands. On Thursday, Irma passed north of Hispaniola and through the Turks and Caicos.

Click or tap the arrows in the hurricane map below to follow Irma’s path as tracked by the National Hurricane Center and Weather Underground. The red area shows where Irma’s winds exceed 75 mph, while the white cone shows the storm’s predicted trajectory.

Over the next few days, the storm is tracking to cross Cuba and affect parts of Florida into early next week. Florida Gov. Rick Scott declared a state of emergency, saying on Twitter that President Trump has offered full government support. Georgia and the Carolinas are also under a state of emergency, designating evacuation zones for residents in certain counties. 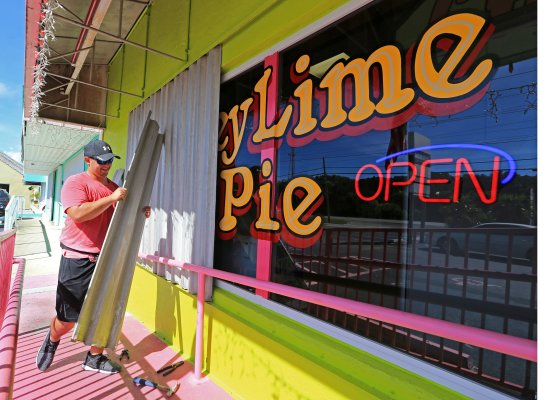 These Are the Hurricane Irma Evacuation Zones So Far
Next Up: Editor's Pick