Why Meteorologists Are Worried About Hurricane Irma in South Florida

Federal weather forecasters urged Florida residents to prepare for the possibility of a major storm as Hurricane Irma strengthened to a Category 5 storm Tuesday morning.

The storm is expected to hit the Virgin Islands and Puerto Rico on Tuesday and forecasters from the National Hurricane Center say the likelihood that it will strike the mainland U.S. later this week has increased in recent days. The odds that it will hit Florida are particularly high, though the forecast still remains uncertain several days out.

Forecasts that Irma would likely hit the U.S. hard. The hurricane’s windspeed has hit 180 miles per hour, among the highest ever recorded in the Atlantic. The five-day forecast shows that windspeed declining to 145 miles per hour by Friday, still high enough to inflict significant damage.

The National Hurricane Center also warned that the storm will be felt far from its center, leading to flooding from storm surge and high winds across a vast area. And, while risks to the rest of the U.S. remain uncertain, but forecasters urged “everyone in hurricane-prone areas” to prepare.

The storm threat comes just days after Hurricane Harvey hit Houston and the surrounding area in Texas, leaving at least 60 dead and billions in damage. 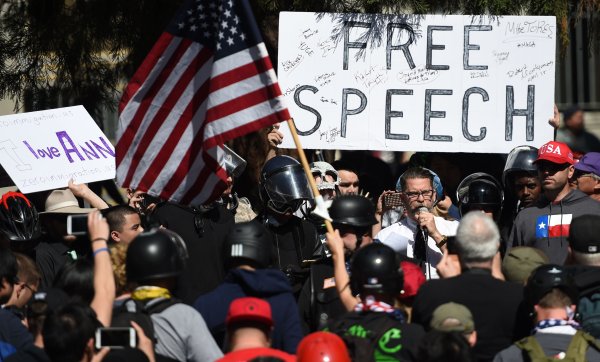 'Free Speech Week' Is Coming to Berkeley
Next Up: Editor's Pick