People carry a placard with a parody of one of the Gupta brothers during a demonstration march organised by a broad-based coalition called #UniteBehind, to place pressure on MPs to vote for the removal of South African President Jacob Zuma (not visible) before a no-confidence vote by parliament, on August 7, 2017 in Cape Town.
Rodger Bosch—AFP/Getty Images
By Tara John

Bell Pottinger, one of Britain’s most prestigious public relations firms, has been expelled by a U.K. industry body for at least five years over accusations of stirring up racial tensions in South Africa.

An investigation by the U.K. trade body, the Public Relations and Communications Association (PRCA), found that the PR firm’s work for Oakbay Capital, the holding company of the controversial Gupta family, would “likely inflame racial discord” in South Africa and was in breach of four clauses in PRCA’s code of conduct and professional charter. Now, the company’s future is in doubt as investors and clients prepare to jump ship. Here’s what to know:

What is Bell Pottinger?

The pioneering PR firm was co-founded by Timothy Bell, who helped launch former Prime Minister Margaret Thatcher’s career. It has worked on behalf of a range of major corporations across a host of sectors, including Airbus, HSBC, Coca-Cola, and Bird’s Eye. It’s also no stranger to controversy; past clients include Syria’s first lady Asma al-Assad, apartheid-era South African President F.W. de Klerk, Belarusian dictator Alexander Lukashenko and the Pinochet Foundation. It was hired by Oakbay Capital in 2016 to help buff the Guptas’ image.

What is the company accused of doing?

South Africa’s opposition Democratic Alliance alleges that Bell Pottinger’s campaign for the Guptas portrayed opponents of the family and South Africa’s President Jacob Zuma as agents of white-owned businesses, or “white monopoly capital,” in a bid to divert attention away from the powerful family linked to a variety of corruption scandals (see below).

A cache of leaked emails in May alleged that the PR firm worked with Zuma’s son, Duduazne, and the Guptas to create a strategy that exploited the country’s racial tensions as well as edited the family’s Wikipedia page. Duduazne apparently told a Bell Pottinger partner that the campaign should be “along the lines of #EconomicEmancipation or whatever,” according to one email reported by the Guardian. Zuma subsequently spoke of “white monopoly capital” being behind calls for his resignation and suggested breaking up white ownership of businesses.

The slogan, “white monopoly capital,” began to air frequently on a Gupta-owned television station. It eventually gained traction in a country where the white minority still hold a disproportionate amount of wealth, Reuters reports. But a protest outside the home of a white journalist held by a group called Black First Land First led to fears that the situation was spiralling out of control.

Irked South Africans now blame Bell Pottinger for orchestrating a campaign where hundreds of fake Twitter accounts posted racial messages against opponents of the Guptas, including white business leaders in South Africa. While it’s unclear who created the fake accounts, the company has apologized for its role in the divisive campaign and dismissed one partner and suspended three staff in July for what it admitted to being unethical and offensive behavior.

Who are the Guptas and why are they controversial?

The Guptas, who consist of brothers Ajay, Atil and Rajesh, rapidly built a business empire, that spans from media to mining, after moving from India to South Africa in the 1990s. Their troubles began in 2013 when their deep political ties in Zuma’s administration were revealed following reports of a private plane loaded with Gupta wedding guests landing at a South African military base, the New Statesman reports. The Gupta family has since been linked to a number of corruption scandals, which includes allegations by former deputy finance minister Mcebisi Jonas who says the family offered him a promotion in 2015 and nearly $50 million if he followed their agenda, the Daily Maverick reports.

Both the Guptas and Zuma have repeatedly denied any wrongdoing, but the issue feeds the toxic claim that the family has exploited their close links with the president for financial gain.

What will happen to Bell Pottinger?

The future of the once-pioneering PR firm is now in doubt. Co-founder Bell, who left the firm due to his unease over the Gupta links, told BBC on Monday that the company “is probably getting near the end.”

“Bell Pottinger has brought the PR and communications industry into disrepute with its actions, and it has received the harshest possible sanctions” Francis Ingham, director general of PRCA, said in a statement. “The PRCA has never before passed down such a damning indictment of an agency’s behavior.”

On Sept 4, the company’s CEO James Henderson resigned following a separate independent review commissioned by the PR firm. “Having read these findings, I recognise the business requires a change of leadership to fix the problems of the past and to move forward” Henderson said in a statement. “I feel deeply let down by the colleagues who misled me. However, I think it is important I take proper accountability for what has happened.”

While accepting the ruling, the company said in a statement that it “disputes the basis on which the ruling was made.” 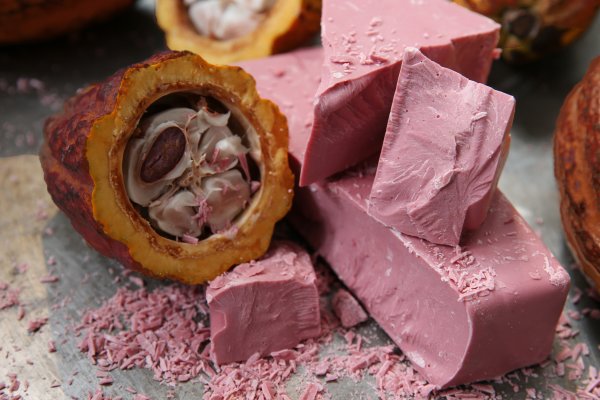 Candy Scientists Invented a Pink Chocolate Aimed at Millennials
Next Up: Editor's Pick