How Hurricane Harvey Could Save Congress From Itself

Washington in August is miserably hot and strangely desolate, especially on Capitol Hill. Lawmakers and their coteries of staff have gone home or to the beach for the August recess. The stragglers on the steps of the Capitol Building are mainly tourists, wiping sweat from their brows.

This year, the languor was tinged with anxiety for lawmakers. Republicans faced tough questions from constituents over their handling of the failed health care bill as they looked ahead to an equally divisive debate over tax reform. They face the routine but difficult work of passing a budget and raising the debt ceiling. And Hurricane Harvey struck Texas’ Gulf coast in one of the worst storms in U.S. history.

“We turn to the left, we turn to the right, and there is a crisis,” said Rep. Sheila Jackson Lee, the Democrat who represents Texas’ 18th congressional district, which includes much of Houston, in the House of Representatives. “We’re resilient and we’re strong, but we’ve got some real issues here. On top of everything, we’re running out of money.”

When Congress returns to Washington on Tuesday, it will have little choice but to get to work, despite a recent track record of delay and failure. The need for emergency relief funding is now only the most urgent item atop an already tight legislative agenda.

There are only 12 legislative days in the House—and a handful more in the Senate—in which lawmakers have to work to beat two deadlines looming at the end of September: they must pass laws that both allow the government to continue spending money and raise the debt ceiling. On top of that, Congress must reauthorize the Federal Aviation Administration, the federal children’s healthcare insurance program and the national program for flood insurance.

“FEMA is burning through money,” said Drew Hammill, deputy chief of staff for House Minority Leader Nancy Pelosi. “We have no choice but to pass something—even though we’re just trying to keep the train on the tracks.”

Some on the Hill see a silver lining in the clouds, however. The overwhelming need and support for securing emergency funding for victims of Hurricane Harvey could provide Congress with the blank check it needs to avoid a government shutdown and take care of its other outstanding business.

For much of August, a shutdown at the end of September seemed increasingly inevitable. At a rally in Arizona on Aug. 22, Trump said he would risk a shutdown if the spending bill that lands on his desk fails to include funding for a wall along the country’s Southern border. But Democrats have made it clear that including wall funding in a continuing resolution to keep the government open for 90 more days is a “nonstarter,” as one senior Senate Democratic staffer puts it.

“The onus is on Republicans,” the staffer tells TIME. “They can decide to go along with the President’s insistences, which could lead to a shutdown, or they could try to work with us and keep the president’s worst instincts at bay.”

Last week, Politico reported that individuals involved in budget negotiations supported bundling Harvey funding in with the continuing resolution to keep the government’s lights on for 90 more days. Doing so would give Trump little choice to sign it into law—with or without funding for the border wall. Vetoing it, says Steve Bell, who served as staff director for the Senate’s Committee on the Budget from 1981 to 1986 and is now a senior advisor at the Bipartisan Policy Center, would amount to a “political mistake of the highest order.”

“I cannot imagine any other president that would even think about vetoing such a bill,” Bell tells TIME. “But I don’t know about this guy. There’s no way of predicting.”

On Monday, Treasury Secretary Steven Mnuchin called on lawmakers to package $7.9 billion in relief funding with a measure to raise the nation’s debt ceiling, preventing the U.S. from defaulting on its loans and rattling global markets. It’s unclear how Trump would react to a bill without wall funding.

In any event, this speculation might be premature. Staffers on the Hill say that Republican leadership is wary of committing to any legislative strategy before lawmakers return to town for party meetings on Tuesday. “The conference will discuss the fall legislative agenda as a team before decisions are made,” said AshLee Strong, a spokesperson for Speaker of the House Paul Ryan.

The weeks ahead will provide a crucial litmus test for Republicans, who, despite controlling both houses of Congress and the White House for the first time in a decade, have failed to pass meaningful legislation this year. GOP lawmakers are still reeling from the failure to repeal the Affordable Care Act earlier this summer, and so is Trump, who in a series of bombastic tweets put the blame on Senate Majority Leader Mitch McConnell.

The discord between the White House and its party in the legislature is likely to make waves once again if Trump announces his intention to repeal the Obama-era policy known as Deterred Action for Childhood Arrivals, which allows children of undocumented immigrants to remain in the U.S. GOP leaders on the Hill have already asked Trump not to do so.

“I’ve been in Washington since the Nixon Administration, and this is unprecedented,” Bell said. “There’s this fundamental deep and public estrangement between the president and his party’s leadership in Congress.”

For now, though, many lawmakers are giving little thought to the long game, focusing instead on the dire need for support for the thousands impacted by Hurricane Harvey.

“President Trump and Vice-President Trump have been down here, saying they’ll stand with us,” Jackson Lee, the Texas congresswoman, says. “But you know what I need standing? A bill on disaster relief that’s signed right away.” 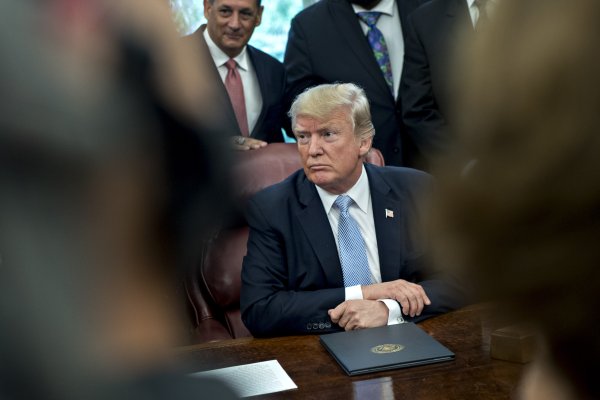 Why Congress Will Decide Dreamers' Fate
Next Up: Editor's Pick