Scientists May Have Found Another Black Hole in the Milky Way

Scientists have found evidence that a mid-sized black hole about 100,000 times more massive than the sun is hiding within the Milky Way, a discovery that could shed new light on the process by which galaxies grow.

Astronomers in Japan collected data supporting the black hole’s existence while exploring a cloud of molecular gas located near the center of the Milky Way, in which the gas moved at vastly different speeds. As they studied the cloud, the researchers saw a clump of gas toward the center of the cloud that appeared to be moved around by massive gravitational forces, they said in a Nature Astronomy report published Monday. (Black holes emit no light of their own, so in order to find them, scientists often look for evidence of nearby gravitational disruptions.)

Located near the clump of gas was a source of radio waves resembling those of Sagittarius A, the massive black hole at the center of the Milky Way, Science reports. The similarities could indicate the existence of a mid-sized black hole, the researchers say. While scientists have data supporting the existence of supermassive and small black holes, Science reports they lacked evidence of the mid-sized variety.

The scientists said the black hole could have formed after a former core of a dwarf galaxy was absorbed by the Milky Way. If the discovery is confirmed, it would support the theory that galaxies grow by “cannibalizing their smaller neighbors,” the researchers wrote. 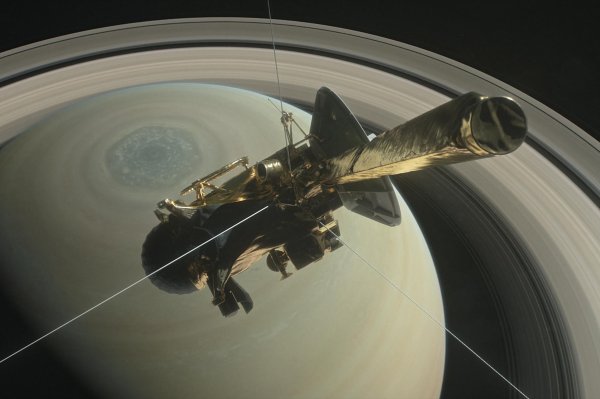 The Cassini Spacecraft Will Soon Commit Suicide on Saturn. Here's What to Know
Next Up: Editor's Pick