Following North Korea’s sixth nuclear test on Sunday morning, which triggered a 5.7 magnitude tremor that shook buildings as far away as northeastern China, the world rounded on the pariah state with unified opprobrium.

Donald Trump also joined the chorus, tweeting that North Korea’s “words and actions continue to be very hostile and dangerous to the United States.” But then the U.S. President immediately turned on Washington’s closest regional ally, not to mention the frontline state in any possible conflict: “South Korea is finding, as I have told them, that their talk of appeasement with North Korea will not work, they only understand one thing!” he tweeted.

Trump’s outburst is hard to read given that South Korean President Moon Jae-in on Friday agreed to ramp up hosting of the U.S. THAAD anti-missile batteries following North Korea’s latest ballistic missile launches. After Sunday’s estimated 120 kiloton nuclear test, which the regime claimed was a missile-ready hydrogen bomb, that deployment is poised to be ratified domestically. Although Moon was indeed elected in May upon promises to put THAAD under review, and urging dialogue with the North, Trump’s charge of appeasement is hard to justify. As such, the tweet was another of Trump’s capricious utterances on social media that put allies as well as enemies on edge.

Read More: James Mattis to North Korea: Any Threat Will Be Met With ‘Massive Military Response’

“You’ve got this massive crisis and the President of the United States is basically undermining the alliance,” says Prof. Stephan Haggard, a Korea expert at the UC San Diego School of Global Policy and Strategy. “It’s appalling. Rather that standing in solidarity with Moon Jae-in he’s badmouthing him.”

It seems, therefore, that Trump’s outburst was prompted, not by talk of appeasement, but trade. According to the Washington Post, Trump is preparing to withdraw wholesale from a free trade deal with South Korea that he believes is unfair. When Moon came to the White House in June, Trump bemoaned the U.S. trade deficit with South Korea, saying, “We cannot allow that to continue.” After Sunday’s nuclear test, Trump spoke with Abe by phone. But he did not speak with the South Korean President.

According to John Park, director of the Korea Working Group at Harvard Kennedy School, the lack of a consistent message is undermining confidence in the Trump administration among allies. True to form, some of Trump’s less radical advisers — such as Gary D. Cohn, chairman of the National Economic Council — have weighed in to say the strategic ramifications of nixing the South Korea trade deal would cancel out any potential gains.

“You have the President of the United States tweeting out something and members of his national security team very quickly dialing it back, or adding nuances or conditions to it,” says Park. “In the beginning it was reassuring, to see that dialing back, but now given the intensity of those dual messages there are a lot of question marks in Seoul.”

There is also uncertainty in Beijing, which received both praise and censure from Trump through Twitter. While the President initially seemed to thank China with one tweet, saying that Beijing “is trying to help but with little success,” four and a half hours later he posted another: “The United States is considering, in addition to other options, stopping all trade with any country doing business with North Korea.”

That undoubtedly refers to China, which is responsible for 90% of North Korean trade across the 880-mile shared frontier. But China is also the U.S.’s largest trading partner, selling $463 billion worth of goods to American consumers last year. Cutting off trade with Beijing would undoubtedly spark a protectionist trade war that would likely cause a global recession. Ian Bremmer, president of the Eurasia Group global political risk research and consulting firm, and TIME columnist, called it: “The least credible policy threat made by Trump since assuming the presidency.”

Not credible doesn’t mean not damaging, however. Few experts believe China will ever squeeze hard enough to foment the collapse of the Kim regime, fearful of an influx of refugees and a united Korean peninsular ruled from Seoul, possibly putting U.S. troops in its backyard. But Beijing appears serious in wanting to curb its erstwhile ally’s nuclear ambitions, signing onto unprecedented U.N. sanctions that target a third of its $3 trillion annual foreign exchange earnings.

However, threatening to end all Sino-U.S. trade doesn’t inspire the necessary confidence for Beijing to take the very hard steps that could really hamper Pyongynag’s nuclear program, such as breaking up the shadowy cross-border business cartels that are a principle source of the regime’s foreign revenue. Because, for Trump, while it may be beneficial to keep enemies guessing as to your true intentions, the reverse is true for allies.

“The close coordination, the secret dialogue, the secret negotiation, that doesn’t exist right now,” says Park. “The confusion aspect is quite dangerous.” 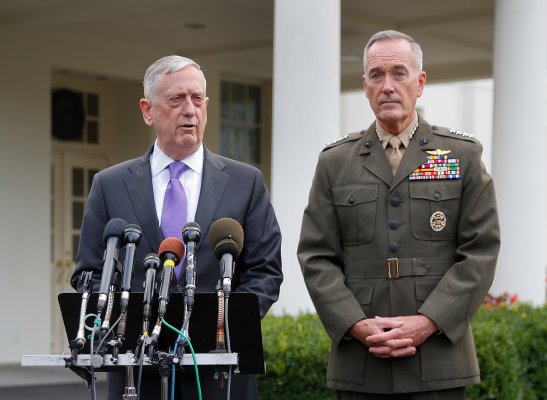 James Mattis to North Korea: Any Threat Will Be Met With 'Massive Military Response'
Next Up: Editor's Pick