North Korea carried out a sixth nuclear test on Sunday morning, triggering a 5.7 magnitude tremor in the northeast of the country, which the rogue state claimed was caused by the detonation of a hydrogen bomb that could be fitted to a ballistic missile.

Although such claims should be treated with caution, as the regime also bragged that its fifth test in September 2016 was a hydrogen bomb — an assertion largely dismissed by experts — Sunday’s estimated 120 kiloton explosion is around ten times the magnitude of its previous test, and clearly shows the Kim Jong Un regime’s technical capabilities are advancing.

In a tweet, U.S. President Donald Trump condemned the test: “North Korea has conducted a major nuclear test. Their words and actions continue to be very hostile and dangerous to the United States.”

North Korea’s state media confirmed the test, which it hailed as a “perfect success,” just an hour before Chinese President Xi Jinping delivered his keynote speech to world leaders the opening of a BRICS summit in China’s southern city of Xiamen. Xi did not mention the test in his speech, though China’s Foreign Ministry released a statement that “strongly condemned” it. Tremors were felt as far away as the Chinese city of Changchun, some 250 miles north-west of North Korea’s Punggye-ri test site.

North Korea typically times missile and nuclear tests to coincide with important holidays and events in China in a sign of fraying relations between the historic allies. China remains North Korea’s largest trading partner though its government is increasingly perturbed by Kim’s relentless pursuit of nuclear weapons and has signed onto stiff new U.N. sanctions.

“The timing is a slap to China,” says Barenklau. “North Korea is saying that it doesn’t care what China thinks or does.”

Despite the international pressure, missile and nuclear tests have continued unabated. North Korea is intent on developing a nuclear-armed ballistic missile capable of reaching the continental U.S., and recent missile launches indicate it is close to that goal. The regime is believed to have more than a dozen nuclear weapons, and on Sunday morning before the test released pictures of Kim examining what appeared to be a miniaturized nuclear weapon capable of fitting on a ballistic missile.

“It shows that the state has the long-term will and determination to do it despite the costs,” says Daniel Pinkston, a Korea expert at Troy University in South Korea, referring to the sanctions. “But the North Korean people pay a very high price for this.”

South Korea immediately convened a national security council meeting after the test, which U.S. seismologists say was recorded at a depth of six miles (10 km). China’s Earthquake Administration said the quake was caused by a “suspected explosion.” Yukiya Amano, the head of the International Atomic Energy Agency, called the test “a matter of grave concern.”

Russia’s Foreign Ministry released a statement condemning the test, and calling on “all interested parties to immediately return to dialogue and negotiations as the only possible way for an overall settlement of the problems of the Korean peninsula.” Japan’s Prime Minister Shinzo Abe called the test “absolutely unacceptable.”

During an emergency telephone call after the test, U.S. national security adviser HR McMaster reassured his Japanese counterpart, Shotarou Taniuchi, the director-general of the Japanese national security council, that Washington was steadfastly committed to defending Japan — including with its nuclear deterrent.

Sunday’s test is another headache for Trump, who has made disarming North Korea of its nuclear arsenal a foreign policy priority. Trump said that “all options remain on the table” after North Korea fired a missile over Japan last week, though military strikes would be a last resort given that U.S. allies South Korea and Japan could be devastated by North Korea’s conventional and possibly also nuclear retaliation.

Trump has therefore resorted to pressurizing China to tighten financial restrictions on North Korea, like former President Barack Obama did before him. In a tweet, Trump said: “North Korea is a rogue nation which has become a great threat and embarrassment to China, which is trying to help but with little success.”

However, analysts say Beijing will never squeeze so hard as to foment the collapse of the regime, fearful of an influx of refugees and a unified, U.S.-allied Korean peninsular ruled from Seoul, possibly putting American troops on its doorstep. 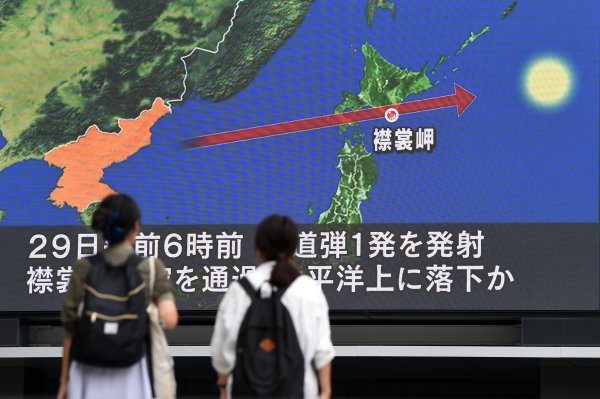 North Korea’s Missile Test Over Japan Was a Calculated Move
Next Up: Editor's Pick