Nearly 400 Die as Myanmar Steps up its Crackdown on Rohingya

(BANGKOK) — Myanmar’s military says almost 400 people have died in recent violence in the western state of Rakhine triggered by attacks on security forces by insurgents from the Rohingya ethnic minority.

The numbers, posted Friday on the Facebook page of the country’s military commander, are a sharp increase over the previously reported toll of just over 100. The statement said all but 29 of the 399 dead were insurgents, whom it described as terrorists.

The statement said there had been 90 armed clashes including an initial 30 attacks by insurgents on Aug. 25, making the combat more extensive than previously announced.

Advocates for the Rohingya, an oppressed Muslim minority in overwhelmingly Buddhist Myanmar, say hundreds of Rohingya civilians have been killed by security forces. Tens of thousands have fled into neighboring Bangladesh, an exodus that continued Friday.

Bangladeshi border guards have tried to keep them out, but thousands could be seen Friday making their way across muddy rice fields.

Some, carrying bundles of clothes, cooking utensils and small solar panels, said they had walked at least three days to get to the border.

Sham Shu Hoque, 34, crossed the border with 17 family members. He said he left his village of Ngan Chaung on Aug. 25 after it was attacked by Myanmar security forces who shot at the villagers. He said troops also used rocket-propelled grenades, and helicopters fired some sort of incendiary device.

Five people were killed in front of his house, he said. His family survived the attack but was told by the soldiers to leave. They took a week to reach Bangladesh, hiding in villages along the way, he said.

Most of Myanmar’s estimated 1 million Rohingya live in northern Rakhine state. They face severe persecution, with the government refusing to recognize them as a legitimate native ethnic minority, leaving them without citizenship and basic rights.

Most Popular on TIME
1
What the Freemasons Taught the World About Secrecy
2
My Husband and I Knew the Dangers of the Coronavirus. How Could We Still Put Our Neighbor at Risk?
3
Was The Wizard of Oz Cursed? The Truth Behind the Dark Stories About the Judy Garland Classic 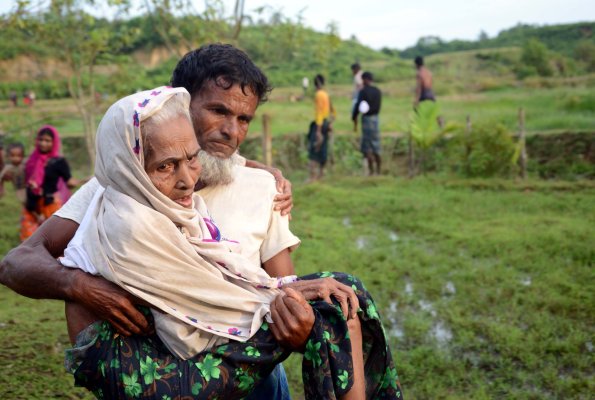