iPhone 8 Specs: Everything We Know About Apple's Next Big Phone

If Apple tradition holds, its next big smartphone, the so-called iPhone 8, will make its long anticipated debut at an upcoming event likely to showcase both new products and refinements to existing gadgets. The keynote, set to occur on September 12 at the Steve Jobs Theater on Apple’s new “spaceship” campus, is expected to be packed with announcements ranging from a new 10th anniversary edition iPhone to an updated Apple Watch, Apple TV and more.

Apple’s next-gen smartphone’s form and specs will undoubtedly be the headliner: it’s expected to change in nearly every way, from its physical design to the size and quality of its screen and the sensors within. Here’s a closer look at the hardware we’re expecting to see in Apple’s 10th anniversary iPhone — which could be called the iPhone 8 or iPhone X — based on the most recent supply chain rumors.

An updated processor and faster memory

Apple never (as in never, ever) discusses its future products ahead of unveilings, but historically it’s always outfitted new phones with updated processors. It’s thus going out on no limbs to say the iPhone 8 will be powered by a next-gen chipset, probably dubbed “Apple A11” if the company keeps to current naming conventions. (The current iPhone 7 models are powered by the Apple A10.)

This new “system on a chip” processor is expected to have a more efficient 10-nanometer architecture (smaller than the A10’s 16-nanometer one), according to Bloomberg’s Mark Gurman. Apple is also widely rumored to be launching updated ‘s’ versions of the iPhone 7 and 7 Plus that will adopt this processor. The iPhone 8 and iPhone 7s Plus are both expected to include 3GB of higher speed RAM, according to KGI Securities analyst Ming-Chi Kuo, while the iPhone 7s would have 2GB of memory.

Here’s one iPhone 8 rumor that’s persisted for months: Apple will use an OLED, or Organic Light Emitting Diode display, rather than an LCD panel for its new smartphone. These types of displays, which are already common in phones made by Samsung and others, generally offer notably better contrast and deeper blacks than LCD screens, producing much more vibrant imagery.

This screen will be larger than that of the 5.5-inch iPhone 7 Plus, says Bloomberg, although the report doesn’t specify by exactly how much. KGI Securities’ Kuo predicts that Apple will use a 5.8-inch panel for the iPhone 8, but that some of the screen space will be used for virtual buttons, as MacRumors notes.

Multiple reports have surmised the new iPhone will include a 3D sensor for facial recognition, which could allow users to unlock an iPhone simply by looking at it. In a note from earlier this year, KGI Securities’ Kuo detailed what he predicts that sensor might entail, calling it a “revolutionary” front-facing camera system according to MacRumors.

The selfie camera would include three main components based on Kuo’s research: an infrared transmitting module, an infrared receiving module and the same front camera as in Apple’s current iPhones. These modules would make it possible for the front-facing camera to sense depth, using algorithms from PrimeSense, the Israeli company Apple acquired in 2013. Rosenblatt Securities analyst Jun Zhang points to California-based Viavi Solutions as a potential supplier for Apple’s 3D-sensing sensors, according to a report from Barron’s.

Read more: iPhone 8 Release Date: Everything We Know So Far

Apple’s new iPhones will let you pick from three colors, including a black, silver and gold option, says KGI Securities’ Kuo. YouTuber Danny Winget claims to have received mockup units showing what the iPhone 8’s color choices will look like, as 9to5Mac notes. In his video below, he shows three different colors: black, white and a third that looks almost like Apple’s current Rose Gold option.

Apple hasn’t fully redesigned its iPhone since it released the iPhone 6 and 6 Plus in 2014, but that’s likely to change on September 12. The company’s 10th anniversary iPhone is expected to be radically different, with an edge-to-edge screen that includes a notch at the top for the selfie camera, according to Bloomberg. Other physical changes could include rounded edges for the screen, as well as a glass back with stainless steel edges that somewhat resemble the much older iPhone 4 and 4s.

Apple is expected to make some changes to the way you charge an iPhone this fall, most conspicuously the addition of support for wireless charging, though that’s a feature Android phones have long supported. But the new iPhones may charge at a slower rate than some competitors over wireless, according to a report from Macotakara. It’s worth noting that Apple joined the Wireless Power Consortium earlier this year, an organization that develops industry standards, which could be a signal that wireless charging is indeed in store for future iPhones.

Separately, KGI Securities’ Kuo predicts that all new iPhone models will come with support for USB-C power delivery through the Lightning connector, which should enable quicker charging when plugged in.

Given Apple’s recent focus on augmented reality, it’s no surprise to hear chatter that the new iPhone may come with a new camera setup to better enable such experiences. The new device will include two rear cameras, like Apple’s current smartphones, but they’ll be situated one atop the other rather than side-by-side, according to Bloomberg. This should position the camera system to work better with augmented reality apps, says the report.

Code buried in Apple’s HomePod firmware, which developer Guilherme Rambo discovered, also points to a new Smart Camera feature for the next iPhone. This capability would enable the iPhone to recognize specific scenes and objects, such as babies, fireworks, a bright stage and snow, among other scenarios.

A new spectrum of storage capacities

Those who miss the 64GB storage option Apple previously offered may be in luck. The iPhone 8 is expected to be available in 64GB and 256GB storage capacities, as both KGI Securities’ Kuo and Chinese social media account GeekBar have noticed. The latter, however, also claims Apple could launch a new 512GB option, which would be a first for iPhones. 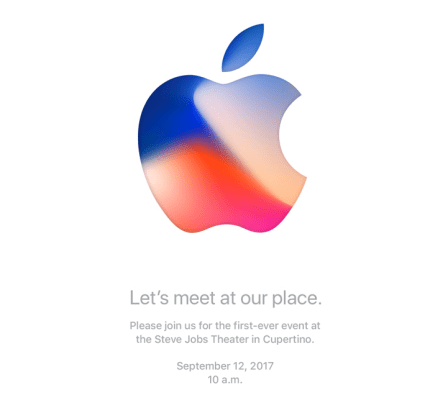 Everything Apple Might Announce at Its iPhone 8 Event
Next Up: Editor's Pick