Here's What Celebrities Are Doing About Hurricane Harvey

After sweeping through Houston and moving onto Louisiana, Hurricane Harvey has left more than 32,000 homeless and caused as much as $100 billion in damage. In response, many celebrities have taken to social media platforms to share their plans to help support victims of flooding and displacement.

Beyoncé, who is a Houston native and maintains strong ties to the city, has been all over social media with her support, promoting a “BeyGood” campaign for Houston and setting up a page on her website to raise funds. More specifically, she’s urging followers to donate to two charities: Bread of Life and the Greater Houston Community Foundation, both of which have set up Harvey relief funds.

Houston Texans football player J.J. Watt has been particularly active in coordinating fundraising efforts through a YouCaring page, posting several videos asking for help. Drake and Ellen DeGeneres have pitched in to his fund, which has so far raised a whopping $11 million (and counting).

Some celebrities have arranged benefit shows to raise relief funds. Beyoncé’s sister and A Seat at the Table singer Solange is pledging the proceeds of an upcoming special Boston concert to support hurricane victims. Houston rapper Bun B has also teamed up with high-profile music manager Scooter Braun, who masterminded Ariana Grande’s Manchester relief concert, for a televised event on Sept. 12. Jamie Foxx, Reese Witherspoon, Hillary Duff, Blake Shelton and Michael Strahan, among others, are expected to help host.

Meanwhile, Oscar winner and environmental philanthropist Leonardo DiCaprio has ponied up $1 million, working with his own foundation to channel funds to the United Way’s Harvey Recovery Fund, PEOPLE reports. He’s not the only one making a splash with big bucks: Sandra Bullock has reportedly contributed $1 million to the Red Cross, too. Kim Kardashian West announced a hefty donation from herself and her family. Miley Cyrus broke down in tears while discussing her $500,000 contribution on DeGeneres’ show. And Tyler Perry is giving $1 million, a quarter of which will go to Joel Osteen’s controversial megachurch.

Comedian Kevin Hart kickstarted a social media donations challenge, calling out famous friends like Dwayne “The Rock” Johnson, Chris Brown and Nelly to spread the word and chip in for relief funds. He’s been joined by the likes of Nicki Minaj, DJ Khaled and The Chainsmokers in the challenge, too

A few are even heading straight to Houston to help out on the ground. Houston rapper Trae tha Truth was spotted by local media making rescues on a boat. Social media star Jake Paul loaded up a U-Haul with friends and is, according to his Twitter, roaming around flooded Houston on a Jet ski, asking stranded residents to send locations for pickup.

Country singer Miranda Lambert, meanwhile, is focusing on the animals: her foundation MuttNation has sent volunteers to bring over 70 dogs to shelters, and she even shared a photo of some rescues she’s personally housing for the time being, including a mother and newborn pups.

Many more, including Cher, Lady Gaga, Lena Dunham and America Ferrera, are sending thoughts and prayers down to Texas, alongside information on the best ways to donate and their organizations of choice. 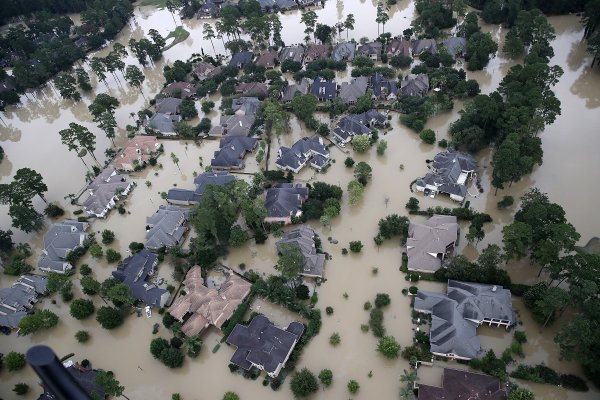 How Humans Make Disasters Worse
Next Up: Editor's Pick