President Donald Trump began his fall pitch for tax reform, but his speech in Missouri Wednesday was short on specifics. Aside from laying out an “ideal” 15% corporate tax rate—which Republicans on Capitol Hill are already backing away from—Trump offered only vague outlines of the GOP proposal. Republican lawmakers have haggled for years over such a plan, but have had trouble devising any sort of widespread consensus. In selling the rough sketch, Trump tried to spin the steep business tax cuts, arguing that “lower taxes on American business means higher wages for American workers.” And while he focused on middle class tax relief, the GOP plan would do wonders for the balance sheets of those in the highest income bracket.

The Trump tax reality. McCain to return to Washington. And here’s how low President Trump’s approval rating could drop.

While he emphasizes benefits to regular taxpayers, much of the push is about cutting corporate rates [Politico]

Was set to take effect in days [Associated Press]

Top advisers in more displays of disagreement with Trump

Set up for fight with Capitol Hill [New York Times]

“So let’s put — or at least try to put — the partisan posturing behind us and come together as Americans to create the 21st century tax code that our people deserve.” —President Donald Trump minutes after attacking Democrats on Capitol Hill

“It’s pretty standard practice for us not to specifically call out staff. He regularly mentions Cabinet members but very rarely mentions staff in speeches.” —White House Press Secretary Sarah Sanders on why Trump did not mention Gary Cohn in his tax address.

The Pentagon Admits There Are a Lot More U.S. Troops in Afghanistan Than We Thought [Associated Press]

John McCain Will Return to Washington D.C. Next Week [TIME] 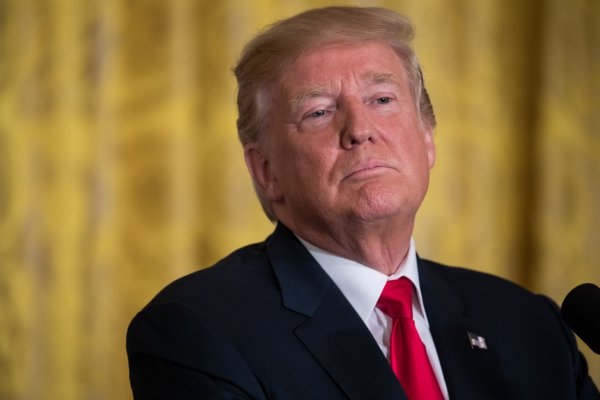 Here's How Low President Trump's Approval Rating Could Drop
Next Up: Editor's Pick