Theresa May Is Going Nowhere. Here's Why

Theresa May has had a bumpy ride in the year and change she has spent as British Prime Minister.

When her position on Brexit was opaque, she was “Theresa Maybe.” When the opinion polls surged, adoring conservatives labelled her Europe’s most powerful leader. As her weakness at retail politics became clear, she became known as the “Maybot.” And then when the opinion polls were proven disastrously inaccurate by June’s general election, she became the Zombie Prime Minister. The humiliating loss of the Conservative Party’s parliamentary majority led to predictions she would be out of a job before the end of the year.

It’s a dramatic change of message from a Prime Minister who told Conservatives shortly after the election fiasco that she would stay on as long as they’ll have her. But it’s hardly surprising, and here’s why.

For one thing, it would project weakness and instability for May to admit she is a lame duck. When her predecessor David Cameron announced he would not fight another election after the 2015 contest, he effectively conceded what authority he had to plan for the future. If May is to lead the country, she has no choice but to do so wholeheartedly.

May also realizes she is now in a position of relative strength. She has no obvious challenger; the man many tipped to replace her, Boris Johnson, has made a weak Foreign Secretary and has lost support from parliamentary colleagues, while the other favorite, Brexit Secretary David Davis, is in the thick of negotiations with the E.U. The government can ill afford him to walk away from those, given the short deadline for agreeing a separation agreement. The party membership is said to want a new leader of a different generation, but no individual has yet emerged to claim the mantle.

Besides, another Tory leadership contest would almost certainly lead to another general election, given the party’s lack of an overall majority — and no Conservative wants to risk the prospect of the far-left Labour Party leader Jeremy Corbyn building on his June gains and becoming Prime Minister.

Then there’s the Brexit negotiations, which have so far achieved little but increasingly bitter acrimony between Britain and the E.U. The government released a flurry of papers over the summer outlining its positions on a range of issues from customs arrangements to the question of the Irish border post-Brexit. But European leaders refuse to negotiate anything until a deal can be reached on the UK’s financial obligations to the bloc — the so-called “divorce bill” that could top 100 billion euros ($120 billion), if Brussels has its way. The talks are coming perilously close to deadlock.

Whoever takes over from May would also have to take ownership of this desperately complicated process, a process made even more complex by internal party divisions between a ‘Brexiteer’ wing that seeks the fastest possible Brexit, and a so-called Remainer wing that wants a lengthy transition process keeping much of the status quo before cutting the strings with the E.U. That is not a job any ambitious politician would want.

So May will cling on. Doubtless, her position remains tenuous — her parliamentary majority rests on a fragile deal with Northern Irish unionists, and a crippling defeat in the Commons will quickly resurrect questions about her overall future. Should Brexit negotiations improve, or Corbyn’s star fade, it’s likely a Tory stalking horse will emerge. Few Prime Ministers get to choose the date they leave office.

Just ask Tony Blair. In early September 2006, the then-Prime Minister confirmed he would stand down before the next election but refused to give a date. “I’ll do it in the interests of the country and in the circumstances of the time,” he said. Little more than nine months later, he was gone. 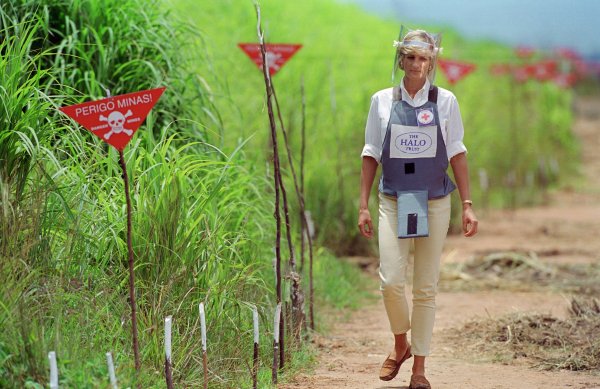 How Princess Diana's Humanitarian Causes Have Fared, 20 Years On
Next Up: Editor's Pick