Donations continue to soar for the Hurricane Harvey relief fund set up by J.J. Watt, defensive end for the Houston Texans, as the NFL player once again increases his fundraising target — this time to $10 million.

“When Texas needed him, J.J. Watt was there. I was honored to help make this amazing gift from Walmart possible,” DeGeneres said on Twitter after presenting the donation on her television show.

“This was truly unbelievable,” Watt tweeted in reply. “Thank you Ellen!”

Heavy rains flooded the Houston area as Harvey slammed into Texas as a Category 4 hurricane late Friday. At least 31 people have died due to the storm, the Associated Press reports, with the toll is expected to rise as the extent of the devastation becomes clearer. Tens of thousands are believed to have been displaced from their homes, and many are in urgent need of water and other vital items.

Apart from the $1 million Walmart donation, Watt’s fundraising campaign, which began with a modest $200,000 target, has seen more than 83,000 donors chip in a total of more than $7.7 million as of 10 p.m. local time Wednesday. 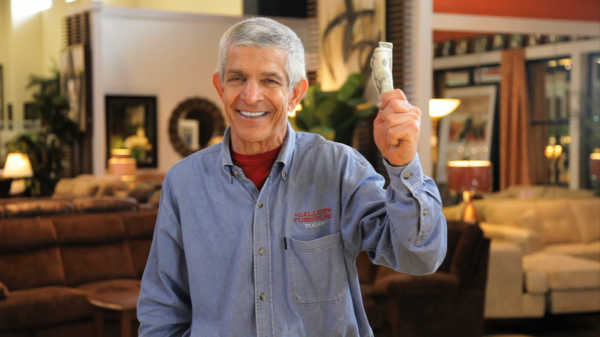 Meet the Man Who Turned His Furniture Stores Into Shelters for Harvey Victims
Next Up: Editor's Pick