‘The Villages are Burning Down.’ Fear and Fire Send Rohingya Fleeing to Bangladesh

Attacks by insurgents. A brutal military crackdown. Thousands of villagers running for their lives. History is repeating itself in Myanmar less than a year after the emergence of a new Rohingya Muslim insurgency first threatened fragile efforts to bring peace to the country’s volatile western Rakhine state.

“In the west of my direction I am seeing smoke,” a Rohingya man in his twenties, who asked not to be named for his safety, told TIME by phone Wednesday from Maungdaw town near the border with Bangladesh. “The villages are burning down.” Markets in the town had been closed, he said, and villagers were afraid of going outside for fear of soldiers. Food was running out. “I can hear my neighbors’ children crying,” he said.

Militants from the Arakan Rohingya Salvation Army (ARSA), which first surfaced with deadly attacks on security forces in October 2016, stormed more than 25 police posts in the early hours of Friday, using guns, knives and improvised explosives to kill 12 people. Ensuing clashes between the group and government troops swept Rakhine state’s northern Maungdaw, Buthidaung and Rathedaung townships, a Muslim-majority region where authorities say the group has been trying to carve out an “Islamic state.” On Twitter, the ARSA claimed the attacks were a “legitimate step” to restoring the rights of Rohingya, a stateless minority who are denied citizenship in Myanmar, confined to displacement camps and barred from moving freely.

At least 110 people were killed during the attacks, most of them insurgents, according to government figures. During ensuing clearance operations by security forces, Rohingya villagers say their homes were set on fire by soldiers, police and Buddhist mobs, and that civilians were shot at as they fled. The government has denied the allegations.

Smoke rises from what is believed to be a burning village near Maungdaw in Myanmar's Rakhine state on Aug. 30, 2017.
STR/AFP/Getty Images

The violence came hours after members of civil society gathered in the commercial capital Yangon to hear the final report of the Rakhine commission, an advisory body appointed by state counselor Aung San Suu Kyi and led by former United Nations chief Kofi Annan. Tasked with finding solutions to entrenched tensions between Muslims and Buddhists, the commission recommended, among other points, amending laws governing citizenship that currently exclude Rohingya.

The next day the government officially dubbed the ARSA “extremist Bengali terrorists” and published warnings in state media against ignoring the sanctioned term. ‘Bengali’ is a derogatory term used to imply that the Rohingya are illegal immigrants from Bangladesh. After an outcry, the official name was changed to “ARSA extremist terrorists.”

A Facebook page belonging to the state counselor’s information committee posted allegations that aid workers had colluded with the attackers, saying World Food Program biscuits were found at an alleged training camp.

In a statement on Tuesday, the United Nations High Commissioner for Human Rights Zeid Ra’an Al Hussein called the attacks “deplorable” and “preventable.” He said he was “extremely concerned” by the accusations against aid workers. “Such statements are irresponsible and only serve to increase fears and the potential for further violence,” he said.

At a meeting with diplomats, national security adviser Thaung Tun doubled down on the allegations, saying ammonia and tubes used by development workers for construction had been fashioned into explosives. In a statement, the World Food Program said it had asked Myanmar to supply details about the food so the batch could be traced but they had not been given. “WFP is currently unable to access its usual operational sites and warehouses with food stocks in the northern part of Rakhine state and has not been able to distribute food and cash assistance in the area since mid-July,” the statement said.

By Wednesday, most aid organizations had pulled their staff out of northern Rakhine amid worsening security fears. “On the way out of Maungdaw to Buthidaung, and even on the boat, we saw villages burning and military helicopters flying around,” said one Western aid worker who was not authorized to speak to media. “The aid agencies are providing life-saving services for people who are in desperate need. It’s a huge shame,” he said.

Fearing reprisals from Myanmar security forces, some 27,000 Rohingya — the majority women and children — have fled across the Naf River that demarcates the border with Bangladesh. Dozens of men have been admitted to hospital in Bangladesh with gunshot wounds and burns, with some dying, said a U.N. official who was not authorized to speak openly. About 20,000 more people are stranded on the border, where some have been for days, as Bangladesh security forces block their entry.

A Red Cross volunteer carries a child who was displaced together with a Rakhine ethnic woman from Maungdaw at the Sittwe port, Rakhine State, Myanmar, 30 Aug. 2017.
Nyunt Win—EFE/EPA

Many of Rakhine’s Buddhists have also fled, seeking shelter in monasteries and schools. The government has helped some 4,000 non-Muslims escape the conflict area. On Friday, Tin Maung, a Buddhist villager from Tha Ye Kon Baung, close to where some of the attacks occurred, was preparing to flee east. “People are afraid in our village,” he told TIME by phone, adding that he saw soldiers going in. On Tuesday, he said he heard the village had been burned down by “Bengalis.”

Farther south in Rakhine state’s Rathedaung, scores of Rohingya are believed to have fled into the mountains, afraid to return to villages that they say have been burned down by soldiers, border guard police and local Buddhists.

Satellite images obtained by Human Rights Watch, showed fires burning in more than 10 locations, across a 100-kilometer stretch of land in Rakhine state. “The reality is that the number of fires is just so high and the distance over which they are occurring is so great that it makes it very troubling and extremely alarming,” said Richard Weir, a fellow from HRW’s Asia Division.

On Tuesday, Molvi Khairul Amin, a Rohingya man who had been living in Chin Kali, a displacement camp that was allegedly burned, told TIME he was sheltering with others from his village in the mountains. “We are living now without food,” he said in an SMS. The 20-year-old Rohingya man in Maungdaw said he had a friend also with that group. “They are eating the leaves of the plants,” he said.

The government insists their clearance operations are legal and that the houses were burned by the militant group. Talking to TIME, Win Myat Aye, Myanmar’s social welfare minister said, without providing evidence: “They burned their own houses and ran. We saw burning. That’s what we know.”

In Maungdaw town, there were fears the violence would spread. “If our house is burned down we will have nowhere to move,” said the Rohingya resident. “For now I can say it’s safe. But no idea. I feel like the same thing can happen tomorrow. We are just in fear and worry.” 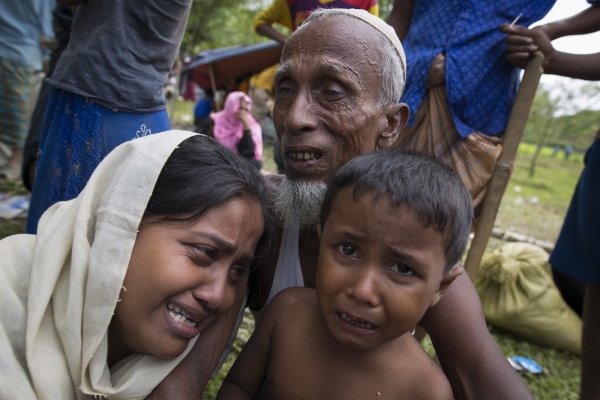