World-famous pastor Joel Osteen is defending his response to Hurricane Harvey amid criticism that his Houston megachurch did not do enough to welcome shelter-seekers until days after the devastating storm first hit.

Speaking on CBS This Morning on Wednesday, Osteen said the doors of Lakewood Church “have always been open.”

“We received people even as soon as the water started receding,” Osteen said. “We worked with the city constantly. The city set up a shelter about four miles from here that can house 10,000 people, showers, dormitories, kitchens, security, all that. They didn’t need us as a shelter at that point. They wanted us to be a distribution center.”

Osteen came under fire earlier this week after a Facebook message from the 16,000-person capacity Lakewood Church claimed that it was “inaccessible due to severe flooding.” But photographs from some Twitter users seemingly contradicting that claim, leading some to criticize Osteen and his church.

“I never dreamed that we would have so many people needing shelters,” Osteen said. “When they filled up, they said we need shelters, we started our shelter. But this notion that we would turn people away or that we’re not here for the city – we’ve been here for 60 years doing this,” Osteen added.

The George R. Brown Convention Center, which has served as Houston’s main storm shelter, has an official capacity of 5,000, but housed 8,300 people displaced by Hurricane Harvey as of Tuesday night. 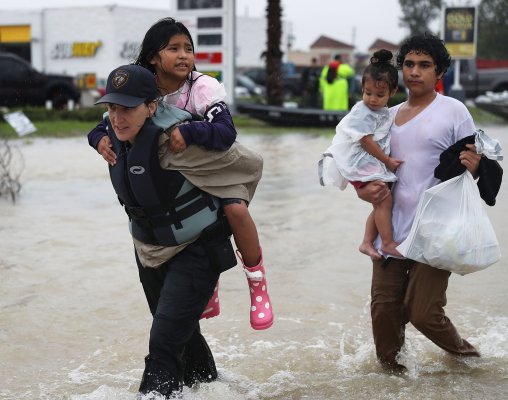 How to Get a Job With FEMA to Help With Harvey Recovery
Next Up: Editor's Pick