A Texas mother died Tuesday while saving her toddler daughter from drowning in the floods caused by Hurricane Harvey’s torrential rain.

First responders in Beaumont, TX, spotted the woman floating with her child on Tuesday afternoon about a half mile from her car, which got stuck in high water on a service road, police said. When the mother pulled into a parking lot and tried to exit the car, she and her daughter were swept into a drainage canal.

“The child was holding on to her mother,” police said in a statement. “The first responders got to the mother and child just before they went under a trestle. Water was up to the trestle and first responders would not have been able to save the child if they had floated under it.”

The mother was unresponsive when first responders reached her. The child, who was suffering from hypothermia, is currently in stable condition, police said.

“They were in the water for quite some time,” Officer Carol Riley, a spokesperson for the Beaumont Police Department, told People. “When the baby was found, the baby was clinging to her. The mother did the best she could to keep her child up over the water.”

She said the mother, whose name has not yet been released, “absolutely saved the child’s life.”

At least 18 people have been killed by Harvey, which on Wednesday made landfall in Louisiana. 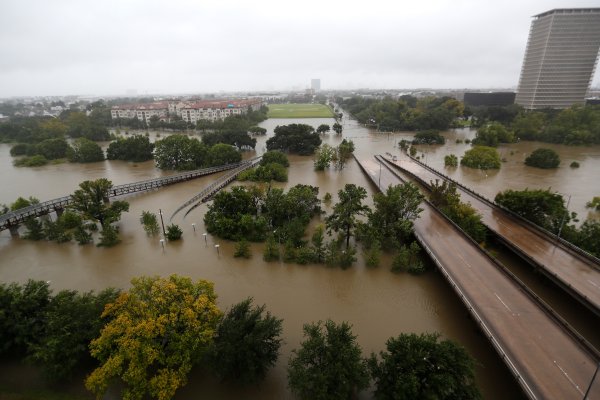 Houston Mayor Imposes Curfew in the Wake of Hurricane Harvey
Next Up: Editor's Pick