Six members of a Houston family are presumed dead after the car they were riding in was submerged in Hurricane Harvey‘s floodwaters on Sunday. The driver of the van escaped through a half-open window and clung to a tree branch before being rescued, but he wasn’t able to save the passengers, including his elderly parents and grandnieces and nephews, who range in age from 6 to 16, family members said.

The nightmare scenario began early Sunday morning, when Sammy Saldivar, 56, tried to bring six of his relatives to safety at his brother’s house, as unprecedented rain pounded Houston. But the van got stuck in high water, and while Sammy was able to free himself, he couldn’t rescue the others before the vehicle disappeared into the rising flood. That’s the last time he saw his parents and the four children.

“Sam calls my husband and tells him, ‘They’re gone,'” Virginia Saldivar, Sammy’s sister-in-law and the grandmother of the children in the van, told the Associated Press. “That’s when my husband dropped the phone and started screaming.”

Ric said Sammy lives in Missouri and was staying in Houston to take care of their parents, Bedia Saldivar, 81, Manuel Saldivar, 84, who were diagnosed with dementia. Sammy planned to stay awake overnight on Saturday into Sunday and evacuate his parents in his truck if necessary. He fell asleep, only to be awoken by neighbors alerting him to the rising waters. His truck was unreachable, but he was able to get to a van he used to drive his parents to his brother Danny Saldivar’s house. When that location also began flooding, Sammy set out for Ric’s house. Before Sammy left, Danny asked him to take his four grandchildren along: Devy Salidvar, 16, Domonic Saldivar, 14, Xavier Saldivar, 8, and Daisy Saldivar, 6.

The Harris County Sheriff’s Department has not yet confirmed that the van’s six missing occupants are dead. But more than 48 hours after the car disappeared underwater, the Saldivar family is bracing for the worst. “I’m sure they’re gone, the way they described the van,” Ric said.

Sammy is now staying at Ric’s house, where Ric is trying to console his brother over what happened, but to no avail.

“He feels like it’s his fault,” Ric said, “no matter what we tell him.” 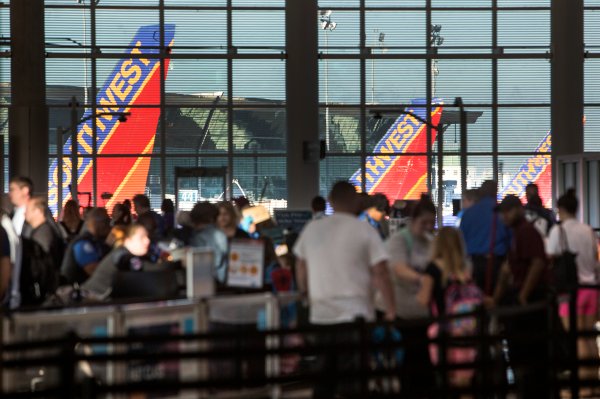 When Will Houston's Airports Open Again?
Next Up: Editor's Pick