Maria Sharapova of Russia returns a shot during her first round Women's Singles match against Simona Halep of Romania on Day One of the 2017 US Open at the USTA Billie Jean King National Tennis Center on August 28, 2017 in the Flushing neighborhood of the Queens borough of New York City.
Clive Brunskill—Getty Images
By Sean Gregory

Maria Sharapova’s trademark grunt was back at the U.S. Open on Monday night, as was her signature style — for her first round match, she appeared in a black outfit by designer Riccardo Tisci and Nike. Her shot-making and swagger were back too. Sharapova, the five-time Grand Slam champion, former world number one, and the most controversial player in her sport, won her first Grand Slam tournament match since serving a 15-month drug ban, beating world No. 2 Simona Halep, of Romania in three sets, 6-4, 4-6, 6-3.

Though the New York crowd offered Halep more vocal support when the players arrived on the court, if anyone booed Sharapova, it was barely audible. Americans have shown a willingness to forgive athletes who’ve taken performance-enhancing drugs. The fans in Arthur Ashe stadium were no different.

Sharapova entered the match with a 6-0 career record against Halep, and this match showed why. Sharapova served heavy, hit all the angles, and covered more ground than her opponent. Halep would not go quietly; she won four straight games in the second set to force a decisive third. But Sharapova refused to beat herself up for losing the lead: she promptly went up 3-0 in the final set before holding on.

With Serena Williams sidelined, and the women’s field unusually wide open, a redemptive run to a second U.S. Open title for Sharpova — who received a wild card invite to the tournament, she’s ranked so low — is far from out of the question.

If Sharapova pulls that off, she’d have risen from the very depths of her once storied career. In June of 2016, the International Tennis Federation (ITF) banned Sharapova for two years after she tested positive for meldonium, a heart medication that has been shown to have potential performance-enhancing benefits. Sharapova has said she’d taken meldonium since 2006, but the drug wasn’t added to the World Anti-Doping Agency’s banned substance list until the fall of 2015 (the ban took effect on January 1, 2016).

She tested positive for the drug at the 2016 Australian Open, the last Grand Slam tournament she played in since before this one. She claimed she hadn’t realized that WADA banished the drug; an ITF tribunal concluded that Sharapova had not intentionally doped, but “she does bear sole responsibility” for “failing to take any steps to check whether the continued use of this medicine was permissible.” On appeal, her two-year ban was shortened to 15 months.

So Sharapova returned to the court in April. Her ranking was too low for her to automatically qualify for the French Open, or Wimbledon; the organizers of neither tournament extended her a Wild Card invite. (She did not request one for Wimbledon, and missed the qualifying rounds because of injury). U.S. Open officials, however, welcomed Sharapova, now ranked No. 146, to New York for this year’s event.

Some players have criticized Sharapova’s return. Canadian star Eugenie Bouchard labeled her a “cheater,” and said she should be banned for life. Bouchard, 23, said that before she played Sharapova at the Madrid Open in May, players she normally didn’t talk to privately wished her luck.

“I’m not oblivious,” Sharapova wrote in a first-person essay published on the Players’ Tribune in July. “I’m aware of what many of my peers have said about me, and how critical of me some of them have been in the press. If you’re a human being with a normal, beating heart, you know … I don’t think that sort of thing will ever fully be possible to ignore. And I don’t think it will ever not be weird or hurtful to go through.”

After winning match point, she fell to the ground, and held a hand to her mouth, a clear gesture of disbelief. She also blew kisses to an enthusiastic crowd. Yes, Sharapova will likely never win back the trust of some players and fans. But a second act is now firmly in her hands. And it got off to a magnificent start in New York. 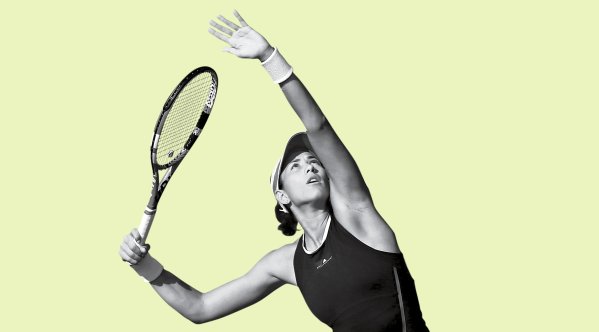 Tennis Star Garbiñe Muguruza, on Whether She's the U.S. Open Favorite
Next Up: Editor's Pick