President Donald Trump defended his controversial decision to pardon Arizona Sheriff Joe Arpaio, calling him a “patriot” and claiming he was unfairly treated by the Obama administration.

“Sheriff Joe is a patriot, Sheriff Joe loves our country, Sheriff Joe protected our borders,” Trump said in a press conference Monday with Finland’s President Sauli Niinistö. “And Sheriff Joe was very unfairly treated by the Obama administration, especially right before an election, that he would have won. And he was elected many times. So I stand by my pardon of Sheriff Joe. And I think the people of Arizona who really know him best would agree with me.”

Trump, who appeared to come prepared for the question, also cited a list of other controversial Presidential pardons, like Bill Clinton’s decision to pardon the late financier Marc Rich for tax evasion as he was leaving office in 2001.

The 85-year-old former Maricopa County Sheriff was convicted earlier this year for violating a 2011 court order to stop traffic patrols aimed at immigrants, and faced a maximum of six years in prison. Arpaio also faked an assassination attempt and once referred to his outdoor “tent city” jail as a “concentration camp.” He lost his reelection bid for Maricopa County Sheriff in 2016.

“Throughout his time as Sheriff, Arpaio continued his life’s work of protecting the public from the scourges of crime and illegal immigration. Sheriff Joe Arpaio is now eighty-five years old, and after more than fifty years of admirable service to our nation, he is worthy candidate for a Presidential pardon,” the White House said in a statement Friday evening.

The White House announced that Trump would pardon Arpaio last Friday night, coinciding with the landfall of Hurricane Harvey in Texas. The timing intensified the criticism, with pundits and critics opining that the Trump administration was trying to bury the news under a barrage of weather headlines. But Trump said Monday that he actually decided to announce the pardon at that time because he thought more people than usual would be watching television on a Friday night because of the hurricane. “I assumed the ratings would be far higher than they would be normally,” Trump told reporters.

Although Trump expressed confidence that the people of Arizona would support his decision — he cited the raucous positive reaction he received in Phoenix last week when he asked the crowd at his rally about it — neither of the state’s Republican Senators supported the measure. Senator Jeff Flake tweeted Friday that he would have preferred Trump “honor the judicial process and let it take its course,” and Senator John McCain released a statement saying the pardon “undermines [Trump’s] claim for the respect of rule of law.” 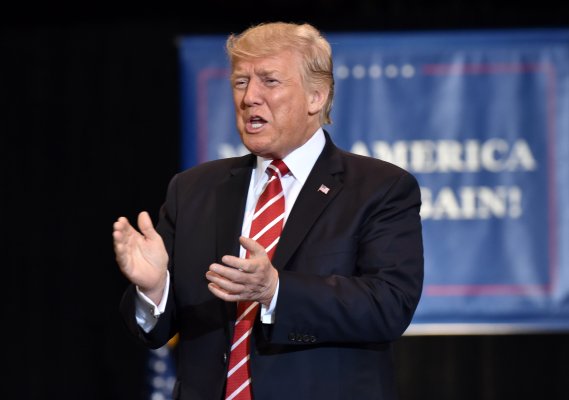 President Trump Tweets About 2016 Election and Border Wall in the Midst of Hurricane Harvey
Next Up: Editor's Pick