Why We Won't Be Ready for the Next Hurricane Harvey Either

The devastating flooding in Houston left by Hurricane Harvey has drawn the normal questions about the government response, from whether officials should have issued an evacuation order to why they chose to release reservoir water.

But flooding experts say the biggest government failure likely came in the years that preceded the storm as the city allowed developers to build new communities with little regard for flooding projections and the federal government promised to subsidize flooding losses.

And, while Hurricane Harvey’s damage in Houston will make the city the storm the most damaging in years, the city is far from the only place in the U.S. vulnerable to disastrous flooding as a result of bad policy. Every state has experienced a flooding event in recent years costing the federal, state and local governments billions of dollars. And experts say sea level rise and increased precipitation related to climate change could exacerbate the problem in the coming years.

“People have for years and years wanted to live along the water,” says Laura Lightbody, who directs the flooding program at the Pew Charitable Trusts. And “there are some perverse incentives in place from a policy perspective to continue to build and live along those areas, which is making them more at risk.”

In Houston, flooding experts attribute the flooding in large part to a lack of zoning laws that have encouraged explosive property development with little regard to the environmental impact and strain on infrastructure. A 2016 ProPublica report warned that as Houston became the metropolis of 2 million people it is today, developers paved over empty land that would have otherwise absorbed rainwater. In situations with extreme storms, rainwater congested waterways vulnerable to overflowing.

Most parts of the country have enacted zoning ordinances, unlike Houston, but local rules often fail to account for the latest science on flood risk. And developers in communities without any such local measures still need to comply with federal standards set by the Federal Emergency Management Agency if they build in flood hazard regions, which would be inundated by a flood that has a 1% chance of occurring in a given year. Those standards require builders to elevate new or substantially renovated structures above that threshold, among other rules.

But preparing for a 100-year flood still leaves communities vulnerable. By the nature of probability, 100-year floods will happen occasionally and leave substantial damage when they do, and some states already require developers to build to more stringent standards. With the climate changing as a result of human influence, it can be difficult to anticipate what will constitute a 100-year flood a few decades down the road.

“We expect everywhere that flooding rains will increase,” said Ken Kunkel, an official at the National Oceanic and Atmospheric Administration, following deadly 2015 flooding in South Carolina. “You can build it now for today’s climate, but you may not be quite in tune to what the climate will be in 50 years.”

In cases where 100-year floods, or worse, do occur, the federal government assumes much of the risk leaving many homeowners with little incentive to move away from a vulnerable property. Many repeatedly flooded properties have received the value of their property—or greater—in payouts from the federally administered National Flood Insurance Program, leaving the program more than $24 billion in debt.

The Obama Administration took steps to address the flooding issue in 2015 with an executive order that required developers who receive federal rebuilding dollars after a natural disaster to do a better job accounting for climate science. Under the order, developers were required to build to the 500-year flood elevation, build three feet above the 100-year flood elevation or to use the best-available climate science to come up with a better standard.

President Trump reversed that measure—which he described as too heavy a burden for developers—in a speech at Trump Tower earlier this month as a part of a broader infrastructure push. “No longer will we tolerate one job-killing delay after another,” he said. “No longer will we accept a broken system that benefits consultants and lobbyists at the expense of hardworking Americans.”

But research has shown that spending more up saves money in the long run. Every dollar invested in mitigating the risk of natural disaster saves $4 in relief and rebuilding costs, according to a Pew report. In Houston, that would have meant billions. 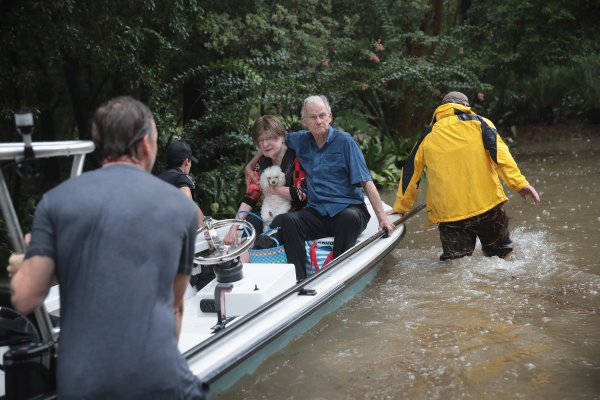