Why the 'Alt-Left' Is a Problem

Two people dressed in black beat a man suspected of being a right-wing Trump supporter at MLK Jr. Park on August 27, 2017 in Berkeley, California.
Elijah Nouvelage—Getty Images
Ideas
By Gil Troy
Troy is a professor of history at McGill University and the author of The Age of Clinton: America in the 1990s.

Donald Trump’s challenge on August 15 — “what about the alt-left” — has stirred silly arguments. Claiming there is no “alt-left” because no one calls themselves “alt-left,” ignores the long, colorful history of political nicknaming. And claiming there is no “alt-left” because all leftists hate Neo-Nazis mistakenly defines the “alt-” modifier as being about racism not fanaticism. With 100 goons from the Left having attacked peaceful demonstrators from the Right as recently as this Sunday afternoon in Berkeley, we must stop viewing the growing epidemic of political brutality through myopic, partisan lenses. The real question remains: Is “alt-left” a useful term?

You can repudiate racism unequivocally, yet still recognize an “alt-left” in America today. The term emphasizes a new breed of extremist — virtual, vitriolic and violent — without getting tangled in the rights or wrongs of being anti-Trump, against police violence or bigoted. Similarly, in the 1930s and 1940s, when Americans condemned Communism and Nazism for being totalitarian, they weren’t accusing Communists of murdering Jews like the Nazis did.

Moreover, believing that in order to exist, the “alt-left” must call itself “alt-left” neuters the power of political nicknaming. In the 1950s, the liberal Washington Post cartoonist, Herblock — Herbert Block — coined the term “McCarthyism” to demean right-wing anti-Communists. More recently, “Politically Correct,” “RINO” (Republican in Name Only), “Snowflake,” “Libtard,” and Cuckservative, were imposed by opponents.

Two centuries ago, the British essayist Isaac D’Israeli called political nicknaming “one of the arts practiced by all political parties.” D’Israeli noticed that sometimes, politicos hijacked a “contemptuous name,” making it their own: The “first revolutionists of Holland” — known as Les Gueux or the Beggars — “accepted the name as much in defiance as with indignation, and acted up to it.”

Although the label “alt-right” originated with “alt-rightists,” Hillary Clinton mainstreamed use of the term. In a sweeping attack a year ago, Clinton condemned Trump as representing the “paranoid fringe in our politics, steeped in racial resentment.” Introducing an unfamiliar term, she explained: “Alt-right is short for alternative right.” She failed to connect the growing familiarity with the word “alt” to the computer keyboard. She quoted the Wall Street Journal’s description of this “loosely organized movement, mostly online, that rejects mainstream conservatism, promotes nationalism and views immigration and multiculturalism as threats to white identity.”

Clinton’s analysis proves why “alt-left” is a useful term. The “alt-left” is also a “paranoid fringe… steeped in… resentment,” and some of the resentment is “racial,” although moral, in that it is resisting racism. It too is “loosely organized, mostly online,” wallowing as the alt-right does in Internet-fueled hysteria and harshness. It too rejects “mainstream” ideology, in this case, liberalism. And it is broader than Antifa, the violent anti-Fascist fringe that combats neo-Nazis and the KKK.

The “alt-left” designation helps explain the Democrats’ emerging civil war, with extremists assailing centrist liberals, and turning the word “neoliberal” into one of their overused epithets. It exposes the postmodern fanatics: bullies who violate liberal principles by shutting up speakers they dislike; brats who riot in Berkeley, Portland, Oakland and elsewhere when they don’t get their way; hypocrites who denounce their opponents’ unreason and violence yet can’t see their own; and brutes who whip each other into vulgar frenzies on the Internet. The “alt-left” is populated by ideologues who reject the American value of compromise. They see a world of conspiracy theories, imagined enemies and exaggerated slights. Ironically, they echo their far right rivals by demonizing Wall Street, the Big Banks, the Mainstream Media — and, frequently, Jews or Zionists. Both far right and far left radicals represent a politics of backlash and lashing out, not consensus-building or reaching out.

Neither Left nor Right has a monopoly on virtue or violence. The “alt-left” continues the violence of the Weatherman and the Black Panthers in the 1970s, and the hooliganism of the “Battle of Seattle” WTO Protestors in 1999. And like the alt-right, leftwing radicals are finding ideological allies worldwide, particular among Jeremy Corbyn’s Labourites; these British leftists also prefer dictating the outcomes they seek instead of trusting democratic processes to work.

Yes, calling radicals the “alt-left” is mischievous, tarring those fanatics with their ideological rivals’ brush. But as Communists and Fascists showed, the political world is round. If you go too far left or right, you meet in the anti-democratic land of intolerance and violence. 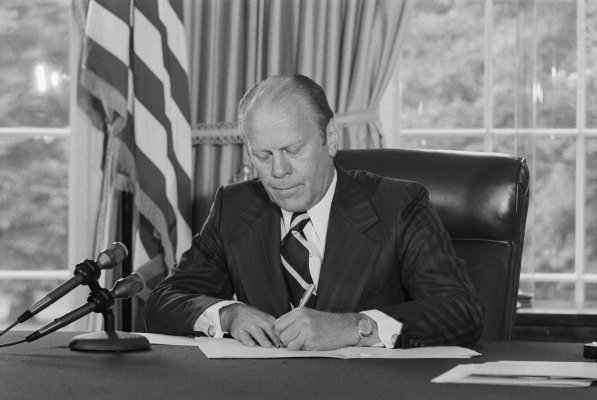 How President Trump's Pardon of Joe Arpaio Breaks With White House History
Next Up: Editor's Pick