How Long the Houston Flooding Will Last

Tropical Storm Harvey may no longer be a hurricane, but the threat of catastrophic flooding continues as the storm is expected to dump another 15 to 25 inches of rain on the Texas coast and parts of Louisiana by Friday.

According to the National Hurricane Center, 50 inches of rain in total could end up falling on Houston and Galveston and other cities along the coast. That means the already serious flooding will only get worse.

Harvey is slowly moving toward Matagorda Bay in Texas and parts of Louisiana on Monday. It will be drifting further east throughout the week, according to the National Weather Service. In three counties—Harris County, Galveston County, and Liberty County—between three and four inches of rain could fall on Monday, the Houston Chronicle reports. In Chambers County, southeast of Houston, some six inches of rain could fall.

Outside of the major impact areas, the National Hurricane Center warns the tropical storm could produce between five and 15 inches of rain in total.

Apart from the threat of rainfall and flooding, some areas remain at risk of tornadoes, including the counties of Liberty, Hardin, Chambers, Jefferson and Orange, where the Houston Chronicle says a tornado watch remains in place until 1 p.m. local time Monday.

Though rain continues to fall, rescue operations and efforts to rid the streets of Houston of some flooding have been underway. Houston Police Chief Art Acevedo told CNN on Monday the police department had already completed some 2,000 search and rescue missions and more are pending. According to the Associated Press, the Army Corps of Engineers began releasing water from overwhelmed reservoirs in Houston to stymie some of the flooding in the city’s downtown, though the procedure could flood additional homes.

Federal authorities on Monday asked everyday Americans, especially those with boats, to assist the people of Texas in any way they can. For more information on how to help, read this post from TIME. 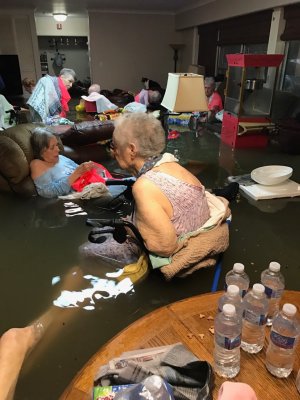 The Story Behind the Photo of Nursing Home Residents Trapped by Hurricane Harvey
Next Up: Editor's Pick