A startlingly effective Game of Thrones season finale Sunday night bid farewell — among other entities — to the longstanding Wall that stood between humanity and chaos.

The collapse of the wall, which occurred at the very end of the episode, augured an end to the scrupulous order which had seemed to last far too long. Much of the season had felt rigorously choreographed to forestall action or to preserve key actors from entering the fray. This episode removed those barriers, and brought forward the sort of thrilling future a show can present when it’s no longer wasting its time.

Little things first, as it were: The death of Littlefinger brought to an end a somewhat frustrating parlor game among fans of guessing who was wearing whose face (was Arya impersonating Sansa? Was the Waif impersonating Arya?). It seemed, reading fan reactions, as though this was the sort of show that allows a mystery to draw out for more than a shot or two. Game of Thrones has always been straightforward in its storytelling — and, indeed, its representation of Arya and Sansa’s coming together (with the help of Bran!) to end the life of Littlefinger seemed to elide the two sisters’ longtime enmity dating back to their childhoods. (It also seemed to elide the fact that, his dislike of Littlefinger nonwithstanding, Bran has mostly provided fairly random outputs to conversational stimuli.) The scene, nevertheless, brought a gratifying end to a season in which the two Stark sisters were perpetually compelling but at times adrift in the story. And while it killed off a character who realistically had no further purpose to serve, its greatest purpose may have been setting up a whole new dynamic for two sisters who never got along.

Further unity of previous enemies: The coupling of Jon and Dany. Occurring against the fairly untelegenic backdrop of Bran reciting the ways in which they are related (I know there was no better way to depict this, but at the same time… there has to have been), the brief shot brings together as a romantic couple two figures who, as leads in the show’s main action, were mainly sidelined this season, and who, when they entered the fray, were proven unable to win. I’m intrigued to see precisely what the pair learn from one another, given the manners in which their shared bloodline has diverged into different military approaches.

Finally, Cersei, whose denial of what is coming her way feels perhaps the most relevant element of the series. Though nothing in the show serves as a direct comment on contemporary politics, her refusal to admit the climate is changing publicly — and then her private admission that it is, but she’ll wait for those affected first to deal with the damage — feel all-too-contemporary. I had expected her not to survive the season precisely because her villainy felt too great to withstand the onslaught of (complicated) good that Daenerys and Jon presented, but it’s become clear that climate-denying evil can get swamped by… the climate. Who cares about the villain who wishes winter on you when winter comes?

Just as the elements came together to bring a conclusive end to Westeros’s summer — with the first flakes dazzling Jaime — so did they come together to wrap up an uneven season. The zombie finale was sufficiently dazzling, and it was preceded by, at very long last, an episode that set up the stakes and the players’ methods in a manner that did more than hypothetical dithering. There have been some great moments in this penultimate season, and a lot of time spent on set-up. But the finale’s big moments proved that the show’s best days still lay ahead. 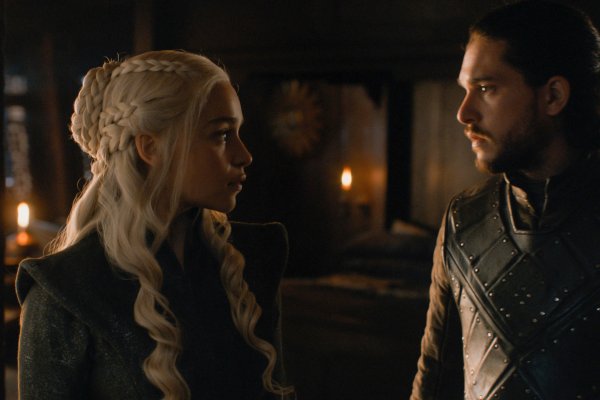 Game of Thrones Just Took a Massive Step Toward Its Ultimate Endgame in the Season 7 Finale
Next Up: Editor's Pick