'Life-Threatening Flooding.' What to Know About Hurricane Harvey

By Katie Reilly and Jennifer Calfas

The disastrous path left by Hurricane Harvey in southeast Texas has caused “catastrophic” and historic flooding that has left countless homes and businesses destroyed, at least two people dead and many more stranded as they attempt to escape the dangerous conditions.

Though it was downgraded to a tropical storm Saturday afternoon as it moved inland, the effect of Hurricane Harvey has left about 300,000 people without power as water floods the streets, creating eerie images of highways that now appear more like rivers than roads.

Officials urged caution in anticipation of “catastrophic and life-threatening flooding” in the days to come — particularly in southeast Texas, where the total accumulation of rain could be as high as 50 inches and “exceed any previous Texas rainfall record,” according to the National Weather Service Weather Prediction Center.

“The breadth and intensity of this rainfall are beyond anything experienced before,” the National Weather Service said in a statement Sunday. “Catastrophic flooding is now underway and expected to continue for days.”

Meanwhile, Houston’s sheriff’s office has said its 911 center has been “inundated” with calls as thousands try to flee from disastrous conditions — with some using social media to post their addresses to ask for help.

On Sunday, Texas Gov. Greg Abbott said 3,000 national and state guard have been called to help. He said on CNN that the state is receiving “everything” they need from the federal government.

President Donald Trump will visit Texas on Tuesday, the White House said. Earlier on Sunday, Trump said in a tweet he would visit as soon as the trip “can be made without causing disruption.”

Here’s what to know about the storm:

Federal Emergency Management Agency chief Brock Long said the agency will likely be in the affected areas “for years.” “This disaster is going to be a landmark event,” Long said Sunday morning on CNN.

Heavy rainfall will cause “catastrophic flooding” that is “expected to worsen and could become historic” in areas like Houston, the National Hurricane Center said in its latest advisory Sunday morning. Flooding could reach as high as 35 inches in some areas.

“Our focus is shifting to the extreme and potentially historic levels of flooding that we could see,” Eric Blake, a specialist at the National Hurricane Center in Miami, told the Associated Press.

More than 3,000 flights have been canceled in the U.S. over the weekend and for Monday — many of them because of Harvey. Both major Houston airports — George Bush Intercontinental Airport and Hobby Airport — closed due to severe flooding from the tropical storm.

The hurricane — the strongest to hit the U.S. in more than a decade — made landfall on Friday night as a Category 4 storm. By Saturday morning, it had been downgraded to a Category 1 hurricane and is now a tropical storm that is expected to cause potentially historic rainfall in heavily populated regions of southeast Texas.

At least 2 deaths have been reported

At least two storm-related deaths were reported in Texas, according to the Associated Press. Emergency crews have not yet been able to assess the full storm damage because of high winds, the AP reported.

Early reports showed that businesses and homes in Port Aransas and Rockport, Texas, sustained heavy damage, as power lines fell, some buildings collapsed and cars were forced off the road.

About 300,000 people were without power as of Saturday evening, according to the Electric Reliability Council of Texas.

On Sunday, the National Weather Service advised residents stuck in flooded areas to go to their roofs if “the highest floor of your home becomes dangerous.” They also warned residents to not enter their attics.

In a press conference on Saturday, Texas Gov. Greg Abbott urged Texans to stay away from floodwater that could be deeper and more dangerous than it looks. “Turn around, don’t drown. Don’t risk your life,” he said, according to the Times. Officials also told residents to not drive on the roads as they flooded.

Trump said he was monitoring the hurricane from Camp David on Saturday and praised FEMA administrator Brock Long. “We are leaving nothing to chance,” Trump said. “City, State and Federal Govs. working great together!” Late Friday night, Trump signed a federal disaster declaration to provide federal aid for recovery efforts.

Health and Human Services Secretary Tom Price also declared a public health emergency in Texas on Saturday as the storm tore through the state.

How to get assistance

On Sunday, Houston Mayor Sylvester Turner said the George Brown Convention Center in the city would serve as a shelter for people affected by the massive flooding, the Associated Press reported. As of the middle of the day, people started arriving at the shelter, which has 1.8 million square feet of space, the AP reported.

FEMA has advised people who are sheltering in place to stay indoors and listen to local officials. People looking for open shelters in their area can find one using the FEMA app or by sending a text message to 4FEMA (43362) with the word SHELTER and their zip code.

People can also apply for assistance online at www.DisasterAssistance.gov

FEMA also advised people looking to help to donate to a nonprofit and linked to a list of organizations that help in disaster recovery.

Zeke Miller contributed to this story.

CORRECTION: The original version of this story misstated the name of the director of FEMA. He is Brock Long, not Brock Turner. 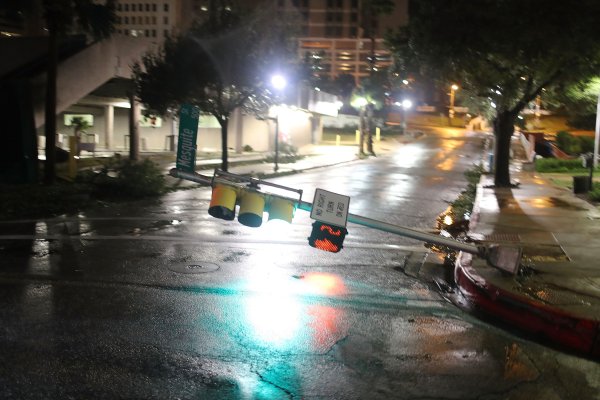 Harvey Leaves Hundreds of Thousands Without Power
Next Up: Editor's Pick