Has the confirmation of human bone fragments found in Aruba pushed the 12-year-old Natalee Holloway mystery closer to resolution?

A forensic scientist on Thursday confirmed the statement last week by Natalee’s father, Dave Holloway, that bone fragments Holloway discovered on the island where the Alabama teen vanished on a 2005 high school graduation trip “are human, and they are of Caucasian, European descent,” according to Oxygen, which is following Dave’s search for answers in its current true-crime series The Disappearance of Natalee Holloway.

But while Natalee is also Caucasian and of European descent, the pathologist, Dr. Jason Kolowski, dismissed reports saying the bone fragments were female. “We are in the dark as to whether these remains are male or female, genetically,” he told Oxygen.com.

Additional testing is underway on what Kolowski identified in the skeletal sample as mitochondrial DNA, which he said comes only from the mother. The sample will be matched against a DNA sample from Natalee’s mother, Beth.

Testing should be complete next month, said Kolowski, a former forensic lab director of the District of Columbia Department of Forensic Sciences and founder of Forensic Insight Consulting in Aldie, Virginia.

The statements by Holloway and the pathologist conflict with an assertion by the prosecutor’s office in Aruba that no human remains were located at a site where Dave Holloway and his private investigator, T.J. Ward, directed authorities in early 2017.

“We have taken note of the news this week that there were human skeletal remains found in Aruba, but we don’t know when and where these remains have been found,” Doryen Kardol, a spokesman for Aruba Public Prosecutor Alexander van Dam, tells PEOPLE.

Acting on directions from Holloway, Kardol says police investigators “found bones, and research was done on the bones, and the conclusion was that they were not human skeletal remains. If they’re not human, they are probably from animals.”

“But we don’t know if there is another investigation conducted by Mr. Holloway,” she says. “I don’t where and when the remains they are talking about were found.”

Holloway and Ward declined further comment to PEOPLE about the discovery, and Holloway referred questions to Oxygen.

PEOPLE reached out to Oxygen about the apparent discrepancy, asking whether the remains found by Holloway came from the same site as the one investigated by Aruba police. PEOPLE also asked why Holloway and Ward didn’t turn over the remains to authorities as part of a formal criminal investigation, and why they apparently took the remains from the island to the U.S., a possible criminal offense, according to the prosecutor’s office.

The series’ executive producer, LB Horschler, responded that subsequent episodes of the series “will answer most, if not all of your questions.”

In a news release last week, the prosecutor’s office said that if human skeletal remains had been found, “this discovery would be significant with the disappearance of Natalee Holloway.”

The statement continued: “However, at this moment, there are no new facts or circumstances known to the Prosecutor’s Offie and/or to the Aruba Police Force in relation to finds of skeletal remains or human bones that were investigated or would have to be investigated.”

Natalee, then 18, was last seen on May 30, 2005, by classmates from her Mountain Brook, Alabama, high school as she left a bar in the company of Joran van der Sloot, a Dutch national then living on the island.

A longtime suspect in Natalee’s disappearance, Van der Sloot has since unspooled a string of ever-shifting stories and hints about what happened to Natalee but has never been prosecuted in the case, and denies any involvement in her presumed death.

He currently is serving 28 years in a Peruvian prison for the unrelated murder of Stephany Flores, who Van der Sloot confessed to killing in his Lima hotel room in 2010 on the fifth anniversary of Holloway’s disappearance. At the time, he was traveling with $25,000 he accepted from Beth Holloway, in exchange for information he promised about Natalee’s whereabouts.

That cash exchange — followed by Van der Sloot’s subsequent confession to Beth’s lawyer, John Q. Kelly, that the information he provided was false — led to federal extortion charges that are pending against Van der Sloot in the U.S.

The Oxygen series follows the quest of Dave Holloway, an insurance agent in Meridian, Mississippi, who was divorced from Beth at the time Natalee disappeared, to find out conclusively what happened to his daughter. It turns in part on a tip from a man who says he was involved in disposing of Natalee’s remains after Van Der Sloot allegedly gave her a date-rape drug and she choked on her own vomit.

Asked what it would mean to know that this could be the end of his search, Holloway recently told PEOPLE: “Right now I don’t want to go there, because it’s a waiting game.”

“When we started this new lead 18 months ago, I’d already made the decision that I’m going to go in skeptical, I’m not going to allow myself to be disappointed,” he said. “I’ve been disappointed for the last 12 years. I’m not going to allow it to affect my family, cause you can just imagine, you go into something believing it’s true and this is going to be the end, and it’s not. It’s like you open the same wound over and over and over again.”

“I decided — and I told T.J. this — I said, ‘look, I’ve got to remain skeptical throughout this whole process,” he said, “because if it’s not [the end], I don’t want to be picked up off the floor again.” 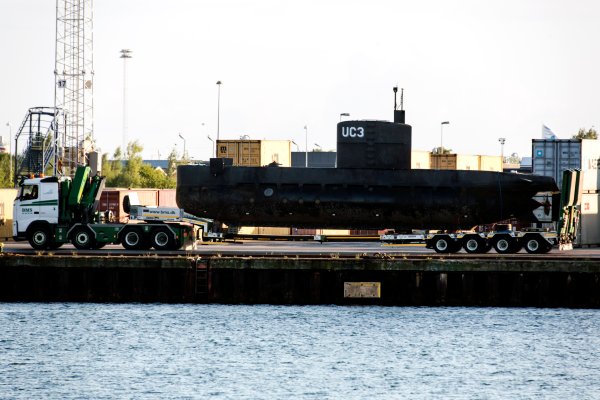 'She Gave Voice to the Weak.' What to Know About Slain Journalist Kim Wall
Next Up: Editor's Pick