He Shared a Photo of His Baby. Then She Became a Political Football

Frank Eaton set out to make an innocent baby photo. He ended up making the latest meme in the culture wars.

The Brooklyn father, who has made video ads for Democrats and LGBT causes for years, decided to take a photo of his 19-month-old daughter, Isla, holding an American flag and wearing an ACLU onesie that said “free speech.”

The ACLU tweeted the image out to its 1.3 million followers with the caption: “This is the future that ACLU members want.”

The tweet was a reference to a tongue-in-cheek meme from March, in which people shared images of “the future that liberals want” to mock conservative fears. But it unintentionally sparked a whole new controversy, with some on Twitter feeling that the image of a blonde baby felt too similar to white supremacist imagery about the future of America.

The ACLU felt compelled to respond, but by then the controversy had moved from a brief Twitter kerfuffle to a morality tale about political correctness for conservative news sites, with Fox News and the Washington Examiner weighing in.

“My daughter becoming a right wing cause célèbre is horrifying, hilarious, and fascinating all at once,” Eaton, 42, told TIME. “My friends were dragging my baby and my enemies were defending her. I mean, I know there’s no handbook for parenting, but this is ridiculous.”

The photos were part of a series on babies in free onesies. Eaton said he thinks the original Twitter caption was “harmless,” adding it was complicated to see learn that “white nationalists” were “saying nice things about my kid.”

But he also felt like the reaction from the left was off too.

“I’d like to see liberals stop attacking their natural allies,” he said. 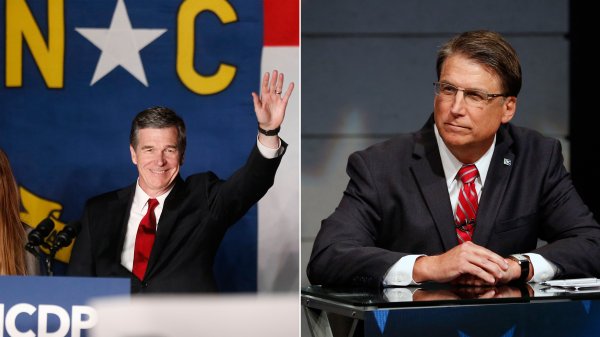 Democracy in North Carolina Could Disappear. Is Your State Next?
Next Up: Editor's Pick