President Trump’s response to the Charlottesville unrest earlier this month nearly led to the departure of chief financial policy aide, Gary Cohn, the Director of the National Economic Council who is being eyed as the next chair of the Federal Reserve. In an interview with the Financial Times, Cohn discussed his rationale for staying after Trump’s “both sides” comments. Cohn said he had spoken with Trump about the need to speak out more forcefully against neo-Nazis and the KKK.

Cohn also moved the Administration’s goalposts once again on tax reform—which at one time it hoped to have completed already—saying the new timeframe is by the end of the year. It’s the latest acknowledgement by the administration that the September legislative calendar is already packed with critical items like raising the debt limit and averting a government shutdown. The White House is also abandoning its plans to produce a tax plan of its own, deferring once again to the committees on Capitol Hill.

The RNC votes condemn neo-Nazis. Zinke backs off on monuments. And Trump lashes out at Corker.

In D.C., Lobbying ‘Swamp’ Isn’t Drained So Much as Clogged
Lobbyist work slows, but not because of Trump [Boston Globe]

“I have come under enormous pressure both to resign and to remain in my current position. As a patriotic American, I am reluctant to leave my post as director of the National Economic Council because I feel a duty to fulfill my commitment to work on behalf of the American people. But I also feel compelled to voice my distress over the events of the last two weeks…As a Jewish American, I will not allow neo-Nazis ranting “Jews will not replace us” to cause this Jew to leave his job.” — White House Director of the National Economic Council Gary Cohn to the Financial Times

“Strange statement by Bob Corker considering that he is constantly asking me whether or not he should run again in ’18. Tennessee not happy!” — Trump punching back at the GOP senator’s questions about his fitness for office

RNC to vote on condemning, but some roll eyes [Associated Press]

Watchdog: Steven Mnuchin and Wife May Have Used Government Plane to Watch the Eclipse [TIME]

Could a President Get Rid of a National Monument? Here’s Why the Answer’s Complicated [TIME] 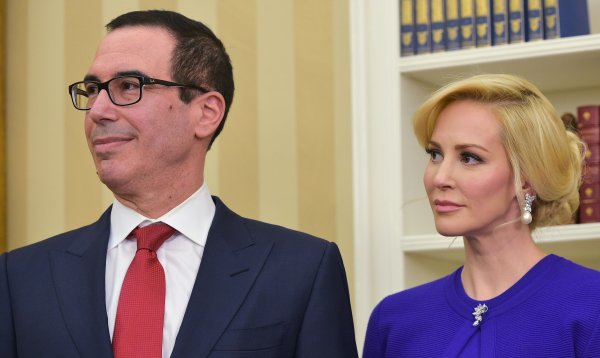 Watchdog: Steven Mnuchin and Wife May Have Used Government Plane to Watch the Eclipse
Next Up: Editor's Pick