How the Great British Baking Show Is Different in Season 8

Season 8 of The Great British Baking Show premieres in the U.K. this fall. But after the program’s controversial move from the BBC to Channel 4, which led to the loss of long-time judge Mary Berry and hilarious hosts Mel Giedroyc and Sue Perkins, does the Baking Show still contain the right ingredients?

Here’s a look at what’s stayed the same and what’s changed in the latest series of the amateur baking program, which has gained a cult following around the world.

Yes, the iconic white tent that has become synonymous with the kitsch baking show is back in business.

“When I saw the tent, my heart rate went through the roof. It’s like my wedding day all over again. Except my wife’s not here,” squeals one contestant less than a minute into the episode. “I’m going to be baking in THE tent. It’s got so much history,” adds another.

Steely-eyed British baker Paul Hollywood is the only famous face to have stuck with the Baking Show following its move to Channel 4. (Former hosts Giedroyc and Perkins released a pun-filled statement saying they were “not going with the dough” shortly after news broke of the show moving from the BBC.)

The Baking Show wouldn’t be the Baking Show without a few mishaps (remember Ian throwing his Baked Alaska in the trash and social media going into meltdown as a result?). Season eight looks as though it will continue in that tradition, if the first episode is any indication. Prepare yourself for more cake-in-trash fiascos and oven disasters.

We may have waved goodbye to Giedroyc and Perkins, but fans should be satisfied with their replacements. Comedians Noel Fielding, co-star and co-writer of the surrealist Mighty Boosh series, and Sandi Toksvig, a regular on QI, have taken over hosting duties. Thankfully, they’re great at it. The pair complement each other well: Toksvig’s straight, matter-of-fact manner works perfectly with Fielding’s more unusual sense of humor.

The pair isn’t afraid to mention its newcomer status: “We’re all newbies here — well apart from ol’ Blue Eyes,” Fielding jokes a couple of minutes into the season premiere, referring to Hollywood.

Hollywood may have stayed, but national treasure Berry has not ventured into Channel 4 territory. Last September, the 82-year-old baking legend announced that she would stay loyal to the BBC, bidding “farewell to soggy bottoms.” Berry has been replaced with Prue Leith, a famous TV chef, cookbook writer and restauranteur.

A pedantic point, but while Giedroyc and Perkins used to alternate “On your marks,” “Get set,” and “Bake” (the Baking Show‘s famous catchphrase), Fielding and Toksvig say it in unison. It’s not worse, it’s just different.

The Great British Baking Show premieres in the U.K. on Channel 4 on Aug. 29. It is expected to be shown in the U.S. next year. 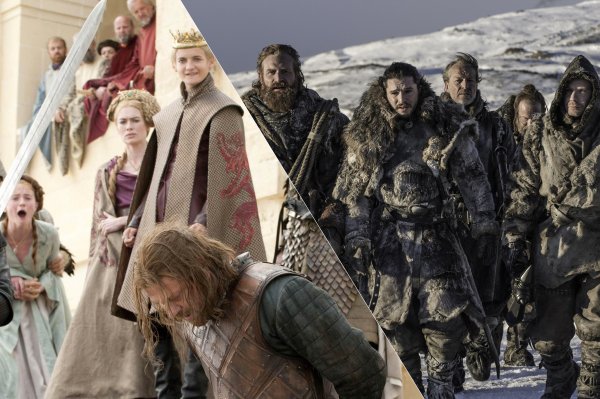 Critics Can Call Out Game of Thrones All They Want. But Viewers Don't Care
Next Up: Editor's Pick