Lee Jae-yong, 49, who effectively ran the world’s biggest cellphone maker in place of his ailing father, stood accused of bribery and embezzlement relating to payoffs to a confidante of Park who lobbied on the $250 billion company’s behalf.

Lee was accused of giving $36 million to non-profits run by Choi Soon-sil, a family friend of Park, in return for political favors including helping to get a controversial merger approved than cemented his family’s control over the company at the expense of smaller investors.

In defense, Lee claimed he was naively unsure of the inner workings of his own company, which he was forced to helm after his father, Lee Kun-hee, slipped into a coma following a heart attack in 2014. The younger Lee rejected the prosecution’s suggestion that he was in fact a master manipulator.

“In retrospect I had a lot of shortcomings and didn’t take care of the things that needed to be taken care of, and that’s all my fault,” he told the court earlier this month. “It was my responsibility. I have no excuses.”

The case has gripped South Korean society, which saw it as encapsulating the inordinate and venal sway the nation’s biggest family-controlled conglomerates — known as chaebol — hold over government and the economy. Samsung alone accounts for some 20% of national GDP.

“[The severity of the sentence] is a little surprising given the way that the courts have previously handled chaebol officials with kid cloves, especially those from prominent families,” Professor Sean O’Malley, a political scientist at Dongseo University in Busan, tells TIME. “Politicians here often think because the family is so important to the economic structure of South Korea they should be treated more leniently.”

South Korean President Moon Jae-in, who replaced Park in snap elections May 9 following the confirmation of her impeachment, has vowed to rein in the power of the chaebol. Although most candidates for South Korea’s top job make this promise, including the ill-fated Park, the Lee ruling is the surest sign yet that South Korea’s courts have taken note of the public mood.

“I’m not sure the government of Moon Jae-in actually had much of a hand in this,” adds O’Malley. “This seems to be the court system simply following the constitution and administering the law.”

Lee’s lawyer Song Wu-cheol told reporters after the ruling that an appeal will be launched shortly, though its almost certain that he will have to do so from detention, where he’s already lived since February. “We are confident the ruling will be overturned,” Song said.

Lee’s conviction raises questions over the future of Samsung, which was already reeling from the public relations disaster of its fire-prone Galaxy Note 7 smartphone. The firm, which made $19 billion of profits last year, saw its share price tumble 1% after Lee’s jailing. 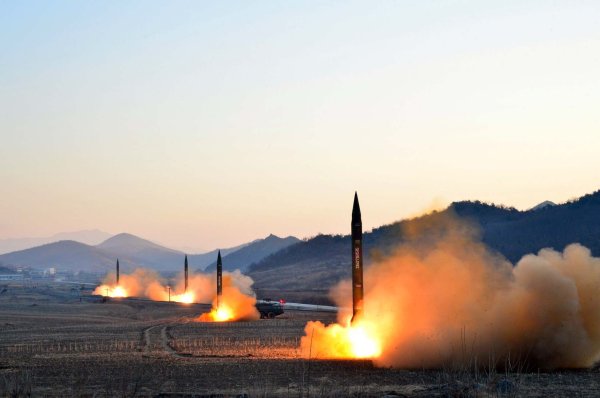 The North Korean Threat Is Good for the Doomsday Prepper Business
Next Up: Editor's Pick