President Trump is the best moon in the entire solar system. He has the greatest craters—beautiful, beautiful craters—and the softest lunar dust. The journalists who cover him don’t have such soft dust. Sad!

You may never have thought of Donald Trump as the moon—a huge, heedless mass, forever doomed to repeat the same cycles day after day, year after year. OK, maybe you have. But either way, Trump apparently thinks of himself just that way. In the middle of a 56-minute Tweet squall this morning, the President retweeted this image, showing his smiling, full-color face slowly eclipsing a grim, black-and-white image of former President Barack Obama. The caption on the picture reads, “The best eclipse ever!”

It’s never terribly easy to parse Presidential tweets. This one is even tougher than most, since there are so many different approaches you could take. There’s indifference: Trump’s retweet finger is a finely honed instrument, designed for speed, not discernment. He sees it, he likes it, he retweets it. The man is busy, after all.

There’s exhaustion: The eclipse? The eclipse? We’re now politicizing the eye-widening, soul-stirring, kumbaya-fest that was the total solar eclipse? Feel free to go lie down in a darkened room if you’d like. The front desk will call you in 2020.

Then, of course, there’s the scientific—and this is perhaps one Trump should have thought about a little bit more than he apparently did. Eclipses happen because every now and then, in predictable but still primally unsettling cycles, a warm, bright, life-giving object is obscured by a dark, dead, insensible rock. The rock is tiny—400 times smaller than the big, bright thing. But it’s also 400 times closer, so it appears much bigger than it is—its size and importance a mere illusion of proximity.

This surely isn’t where President Trump wanted to go, but hey, once you invite science to the dinner party, you don’t get to ask it to leave just because you don’t like the jokes it’s telling. So let’s consider too that it is during an eclipse that the sun in some ways shows itself most brightly. It’s not the black disk that the moon creates at the moment of totality that transfixes us so—that’s just a hole in the sky. It’s the brilliance of the solar corona—the veil of incandescent gasses that stream millions of miles into space. Try to look at the sun at any other time and it’s an exercise in pain and gaze aversion. Look at it during an eclipse, and it’s the hidden object—in this case Obama—not the obscuring one, that knocks your socks off.

The President’s opponents are not above just this kind of semiotic misfire. The eclipse meme Trump retweeted echoed a more slapdash entry from his opponents, with a smiling Obama moving in front of a snarling Trump and text that read, “The only eclipse we really wanna see.”

No matter the particular meme, both sides should remember that it’s possible to go too far down the science-as-metaphor road. Start talking about the quantum entanglement of lifting the debt ceiling and building the border wall, or the Newtonian action of passing Obamacare giving rise to the equal and opposite reaction of trying to repeal it, and you’re definitely going to lose the room. (The one exception to this rule: Feel free to call anyone or anything at all a boson. Bosons are always funny.)

All the same, unlike most presidential tweets, there’s something to be learned from Thursday morning’s little offering, provided you look at it the right way. Science is a slow, patient, iterative process, in which serious people work very hard to arrive at elusive truths and meaningful results—results that often make the world a much better place. Politics, done right, ought to be the same thing. In a White House that has become the governing equivalent of a basement lab, it might be time for a little of the rigor the real scientists apply every day.

Jeffrey Kluger is Editor at Large for TIME magazine and the author of Apollo 8. 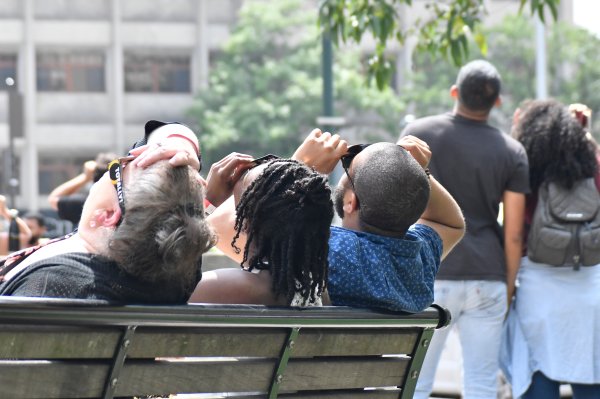 Missed the Solar Eclipse? Here's What It Looked Like Where You Live
Next Up: Editor's Pick