Why Your Dishwasher Is Talking to Your Energy Company

A programmable heater control is installed on a radiator on Jan. 16 in Berlin.
Thomas Trutschel—Photothek via Getty Images
By Justin Worland

The giant natural gas leak that hit California’s Aliso Canyon reserve in late 2015 led to a massive quantity of methane being released into the environment, contributing to man-made climate change and raising health concerns for nearby residents.

But the leak of more than 100,000 tons of methane also served as a critical test for a demand response, a practice in which electric utility companies push customers to reduce consumption in times of high demand or limited supply. Faced with the shutdown of one of the largest natural gas storage facilities in the U.S., utilities needed to find a way to ensure a steady electricity supply to more than 10 million people in the Los Angeles region without being able to simply build more power plants.

Demand response offered a solution. Southern California Edison, the local utility company, put millions of dollars into programs that would reduce demand during summer days when there might have been blackouts. Thanks to the effort, they were able to give rebates to customers who cut their energy use during time peak demand and pay customers to install a thermostat that communicates with the company, among other initiatives.

The quick deployment of the demand program worked and, while regulators cleared the Aliso Canyon facility to reopen partially this year, they also said the closure helped prove that the state no longer needs the storage well.

“Demand response provides a valuable resource for managing peak demands, without the need for natural gas generation,” Gary Saleba, president of the engineering consultancy EES Consulting, wrote in February in a report commissioned by Los Angeles County. “Clearly, there is plenty of potential for additional demand response to be acquired.”

The basic concept of demand response has existed—at least in theory—since the first days of electricity use. The thinking was simple: why should energy cost the same when no one is using it as its periods of highest demand? In recent decades, utility companies have responded by offering financial incentives to encourage primarily commercial and industrial customers to reduce their energy consumption.

Recent advances in technology have made it easier to practice demand response far more widely. No innovation has been more important than smart meters, which allow energy use to be tracked down to a few minutes of time. The rise of smart homes has also allowed utility companies to communicate seamlessly with energy-gobbling home appliances, adding further precision.

These programs help energy providers ensure the available electricity supply meets the demand, and most of this will occur without the average person thinking twice about it. The refrigerator might defrost or the water heater might turn on when there’s excess electricity being produced, while the washer and dryer might pause when there’s high demand. In exchange, participating homeowners pay lower electricity bills.

“In an ideal world, using this smart technology that people are unaware of can make the system more financially efficient but also more electrically efficient,” says Peter Cappers, a research scientist the Lawrence Berkeley National Laboratory who studies demand response.

Changing when a homeowner runs his dryer may not sound like a big deal, but a collective shift could pave the way for utilities to deploy more wind and solar power—energy sources that cannot be turned on and off with a flick of a switch. Solar and wind power tend to be strongest at times that do not necessarily align with consumers’ need for power. Demand response shifts usage to meet when that supply is strongest.

“This real problem is keeping the grid in balance,” says Cappers. “One solution is to get people to shift their electricity use to when the sun is cranking in the middle of the day.” 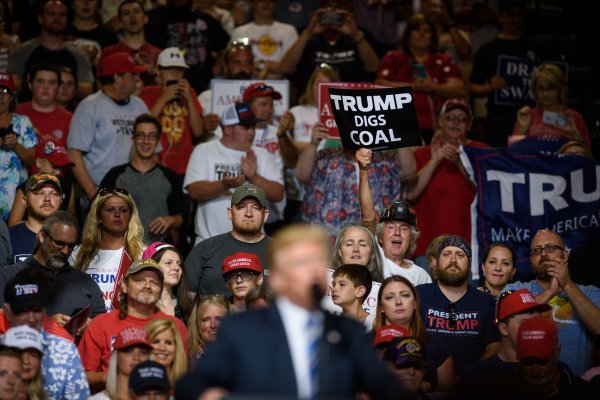 What Trump Really Means by 'Clean Coal'
Next Up: Editor's Pick