Residents in Macau began clearing debris Thursday a day after the casino hub was lashed by hurricane-force winds and torrential downpours from Severe Typhoon Hato, which also battered southern China and brought Hong Kong to a standstill Wednesday.

At least 16 people were confirmed to have died in the storm, reports Agence France-Presse. Eight of the victims died in Macau, while the others were from neighboring Guangdong in mainland China, according to the state-run CCTV. About 27,000 people were evacuated to temporary shelters in the Chinese province.

Local media showed scenes of cars submerged in water and smashed windows in Macau, where a widespread power outage continued to plague residents and businesses into Thursday.

Hato was the strongest typhoon to hit the region in 18 years, reports South China Morning Post, resulting in more than 150 injuries and 300 reported cases of property damage, flooding and uprooted trees as of Thursday morning.

The storm also caused significant disruption to Hong Kong Wednesday, forcing the vibrant business hub to a halt. Transport links, businesses and stock market trading were back to normal on Thursday, but parts of the territory were still grappling with wind damage and flooding, which shattered windows and left large amounts of debris strewn on the streets.

By some estimates, Hato could cost the territory up to $1 billion as a result of suspended stock trading, disrupted business and widespread flight cancellations, the Post reports. 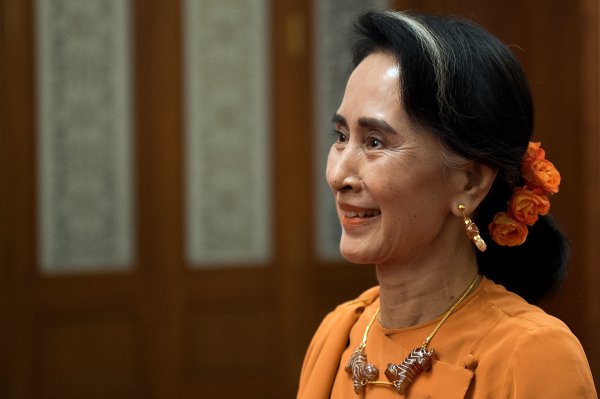 How Aung San Suu Kyi Can Maintain Her Credibility in Myanmar
Next Up: Editor's Pick