George R.R. Martin Would Like You to Know That He Watches Game of Thrones

George R.R. Martin just returned home to New Mexico after traveling for a month to read some unexpected news: That the Game of Thrones author… doesn’t actually watch Game of Thrones.

That’s what several media outlets (such as the New York Post) are reporting Wednesday following a series of interviews the best-selling author recently gave at a fan convention in Russia. One headline literally read: “George R.R. Martin: ‘I don’t watch Game of Thrones.’”

Martin told EW via email he can’t recall saying he doesn’t watch the acclaimed HBO drama series and notes that perhaps something was mangled during translation. During his trip abroad he didn’t watch any television — and he’s behind on Thrones‘ current seventh season. So perhaps that was a source of confusion. But Martin does watch the series.

Regular readers of Martin’s blog know he posts HBO’s trailers, hosts screenings of GoT at his historic Jean Cocteau Cinema in Santa Fe, New Mexico, and will praise the fantasy drama’s actors, producers, and crew during awards season. In general, however, Martin avoids discussing the show’s current storylines — which have extended beyond the narrative scope of his five A Song of Ice and Fire novels — deferring questions to showrunners David Benioff and Dan Weiss.

Read More: Game of Thrones: How They Make the World’s Most Popular Show

Martin is also heavily involved in HBO’s Game of Thrones prequel projects in development (of which four have been confirmed by the network). And of course, he’s also working on sixth ASOIAF novel, The Winds of Winter.

The 80-minute seventh season finale of Game of Thrones airs this Sunday. Check out HBO’s 9 photos from the final episode. 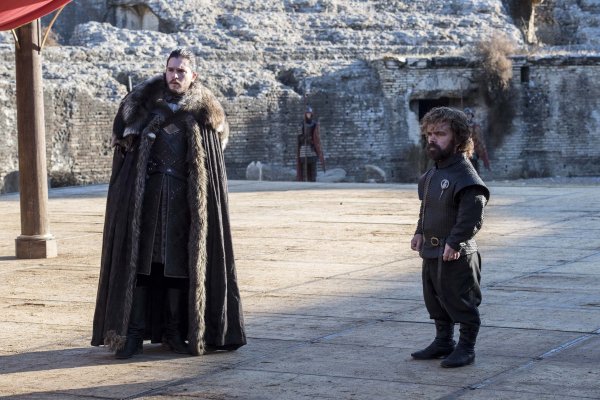