Trevor Noah had some salient opinions about President Donald Trump’s speech on Monday, especially when it came to the President’s strategy for the war in Afghanistan.

“I’m sorry, look, I know that he’s been president for seven months, but seeing Donald Trump making military decisions is still weird for me,” Noah said. “I mean, he must be the first human being in history who gets to command an army after starring in a Pizza Hut commercial.”

“Trump’s actual strategy is like his position on Nazis,” he said, drawing a parallel to the president’s controversial comments following violent white nationalist protests and counter-protests in Charlottesville, VA. “It’s unclear.” He also riffed on the president’s assertion that he was a “problem solver” by drawing a cogent pop culture comparison.

“Yeah, Trump is a problem solver the same way Godzilla is a city planner,” Noah joked.

Noah closed his segment by pointing out that Trump may have taken a page out of Melania’s book when it came to taking inspiration for speeches from the Obamas, going so far as to show side-by-side comparisons of the two and remarking that it was like the President was “slapping his name on someone else’s project and doesn’t have any fresh thinking of this own.” 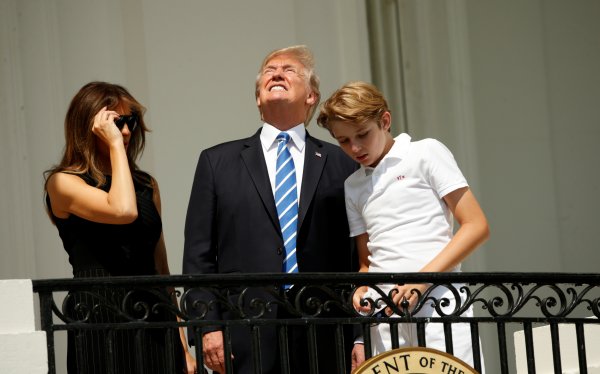 Trump Stares Into Sun, Gets Burned by The Daily Show
Next Up: Editor's Pick