When you think of spring break, you probably don’t envision a congressional hearing on Benghazi. But politics runs deep in the home of Mike Rogers, the House Intelligence Committee chairman, whose college-age son is spending his time off from school in Washington, D.C., this month, and who attended the hearing his dad convened Wednesday on the 2012 tragedy in Libya that Republicans call a scandal and Democrats a dead horse. “Don’t give him any ideas,” Rogers said with a chuckle when TIME suggested to his son that spring break should be enjoyed on a Florida beach, not in a Rayburn building hearing room.

It’s actually the elder Rogers who’s about to enjoy a good time. After more than a decade in Congress, the Michigan Republican announced last week that he’s leaving the Hill at the end of this year to become a talk-radio host, with a national show syndicated by Cumulus Media. The salary is undisclosed, but presumably large enough for a few luxurious beach vacations. And for a man who loves to talk — Rogers has long been a fixture on political television — the new gig should be a breeze.

Nor does Rogers seem to be foreclosing a political future, unlike the countless members of Congress who jump to lucrative influence-peddling jobs. “I don’t think I’m done with government service,” Rogers said with a knowing smile, before unsubtly offering that his show will reach primary states like Iowa, New Hampshire and South Carolina. (Presidential intention or PR gimmick? You decide.)

For now, though, Rogers is still in the thick of it — consumed by the parade of horribles on view in his regular classified briefings, fretting about America’s myriad vulnerabilities. In a TIME Newsmaker interview, Rogers talked about which threats worry him most, his belief that President Barack Obama has gone too soft on al-Qaeda and just what he means when he says Edward Snowden is “under the influence” of Russian officials. Here’s a partial transcript:

You just held yet another hearing on Benghazi, this one featuring former deputy CIA director Michael Morell. So much has been said about that night already — did you really take away anything new?

The takeaway is that the CIA had all the relevant information. There was confusion in the day or day after the attack, but it started to gel that this was an al-Qaeda extremist event — yet the narrative of the Administration never changed.

Isn’t one reason the Benghazi debate never ends that people disagree about whether it’s correct to call it an “al-Qaeda event”? Even if people with al-Qaeda connections were involved, that doesn’t mean it was planned and organized by core al-Qaeda leaders. Which is what the New York Times reported in December.

That all went out the window today when the deputy director of the CIA said that the reason he removed references to al-Qaeda from the talking points was because they had sources that said al-Qaeda participated in the event, and in their mind they didn’t want to disclose those sources. [See here for more on Morell’s testimony and this dispute.]

We have numerous people that we know participated in the Benghazi attacks affiliated with al-Qaeda that are still on the battlefield. We have the capacity to get them but there’s no planning to get them. We have other serious al-Qaeda threats that normally we would take off the battlefield, but because of this Administration’s more kinder, gentler approach we have not done that.

What do you mean by a “kinder, gentler” approach? Is that because the pace of drone strikes seems to have slowed?

I’m not allowed to talk about specific programs. But I can tell you that there are ways that we have taken people off the battlefield that have been disruptive to their ability to plan operations, and there are cases where we are no longer doing that.

And if you have serious al-Qaeda players remaining on the battlefield because of bureaucracy created here, that’s a problem. We know from the 9/11 Commission that once nothing happened after the U.S.S. Cole was bombed in 2000, the psychology of that empowered al-Qaeda and led them to do bigger and bolder things. Which led to 9/11.

The old slogan is that Osama bin Laden is dead and General Motors is alive, and that al-Qaeda core is going away. Which is inconsistent with the facts that we know. And it concerns me that it is translated into policy. If you tell everybody that works for you that al-Qaeda’s not that big a threat, well, guess what? Their decisions will reflect that.

You get classified briefings. Apart from al-Qaeda, what worries you the most?

Oh, which one? Cyber is the biggest national-security threat I’ve ever seen, one that we’re not prepared to deal with. Disengaging the size and scope of our military has sent a pretty awful message — it has said to countries they can invade their neighbors without fear of retribution. Radiological material, black-market issues around the world. Iran’s interest in getting a nuclear weapon.

How about bioterror? Not everyone thinks it’s a serious threat.

I do worry. It’s cheap. That’s worrisome. I did a biodefense bill to stockpile prophylactics. I still worry about it, because we know it’s out there and we know that al-Qaeda has talked about trying to get their hands on it.

You have said that Edward Snowden is “under the influence” of Russian officials. What does that mean, exactly? That they house him? Pay him? Recruited him? People say you’re casting aspersions without evidence.

The NSA contractor is definitely under the influence of Russian officials. We know that he was in China, Hong Kong anyway, and in Russia today. We have seen patterns and activities that lead us to believe that some or all of that information is being worked through by those intelligence services and putting the U.S. at risk.

“The NSA contractor” — you don’t use his name?

I think people have wrongly given him some elevated status, and he has some kind of an underground rock-star status. He’s a traitor who puts our soldiers lives at risk.

So what exactly does “under the influence” of Russian officials mean?

First of all, he’s living about a mile from the FSB [Russian security service] facilities. We know he has regular conversations with the FSB. And remember we have a long history of both KGB and FSB operations, we know how they work. The FSB grabbed a guy off the street in Kiev who was involved in the street protests, cut his ear off, drilled a hole in his hand — all to make him confess that he took money from the Americans to foment problems in Kiev. This wasn’t 1950, it wasn’t 1960, wasn’t 1970. This was this year.

So we see how they get people to cooperate, the kind of tactics that they use. And it is absolutely naive to believe that this guy who we know has been in the custody of intelligence agents of the Russian Federation, who has been housed in the joint facility, who got permission to go to work — that’s just not happening without their approval.

No, no, not a joint facility. He’s housed very near an FSB facility. Makes it convenient for everybody.

And remember we have other classified ways as well. That’s why no counterintelligence official does not believe that today he’s under the influence.

But that’s not the debate. The debate is, when did it start? Did it start in 2010 when he was taking classes in India, and made it known — in a place that is frequented by Russian intelligence officials — made it very clear that he was working for a U.S. intelligence agency? We don’t know, exactly. The FBI would call that a clue. In the spy business you call that a dangle.

We have other cases, you can go back and look at the history of profiles of someone who did not get along with co-workers, who had employment-history problems. This guy fits the profile to a T. I get worried when people want to think he’s something different than he is.

You took over the House Intelligence Committee in January 2011. Is the average American more or less safe today?

Oof. [Pauses.] Again, there are counterterrorism policies that I disagree with that I argue put us in a more dangerous position today. On this committee, I think the oversight is far better, I think the budgeting is far better. We chased partisanship out of the committee.

We engaged in constructive investigations — the Huawei investigation, for example, where it was darn close that the Chinese government was going to own the pipes through which all our private information traveled within the United States. And that is no longer the case, because of the work of our report. We have moved the country to a better place to be better protected on a whole host of threats.

Will you have more influence as a talk-radio host than you do as a Congressman?

The opportunity is pretty significant. It’s across the country. It’s talking to people every single day to develop a relationship. The kinds of things I was able to do at the committee never get talked about. This notion that if we just hide under our desks, the rest of the world will leave us alone and we’ll have a prosperous nation is dangerous. And that perspective is there on both the right and the left.

I think more people will tune in, and we’ll have better, more fired-up and productive conservatives at the end of the day.

And if a Republican is elected in 2016, will you return to run the CIA, FBI or Department of Homeland Security?

I look forward to the opportunity to talk to people in Iowa and New Hampshire too, that’d be nice. And of course New Mexico, Michigan and South Carolina. [“Ooo-kay,” an aide says warily, ending the interview on schedule. Rogers laughs.]

This transcript has been edited lightly for clarity and readability. 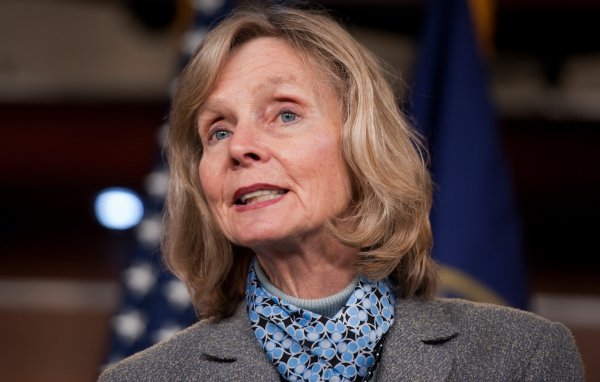