His height came up most recently in the second episode of season 8 during a conversation between Daenerys Targaryen and Sansa Stark. Daenerys is defending her relationship with Sansa’s brother, Jon: “I’m here because I love your brother and I trust him, and I know he’s true to his word. He’s only the second man in my life I can say that about.” Sansa follows up by asking who the first man was. Dany is quick with her quippy response: “Someone taller.”

It wasn’t the first time Game of Thrones has worked in some playful ribbing of this kind. The running bit is likely a response to the internet’s obsession with actor Kit Harington’s height.

“You used to be taller,” Arya teases Jon when she surprises him beneath the weirwood tree during their long-awaiting reunion in the season 8 premiere.

In the show’s seventh season, characters commented on the King in the North’s small stature several times. In episode five, Gendry commented that Jon was a lot shorter than Jon’s presumed father Ned. Jon gamely laughed at the comment.

And in season 7’s sixth episode, Daenerys told Tyrion that Jon Snow was “too little” for her. (The comment was a bit strange considering that actor Emilia Clarke is herself quite petite. But her character Daenerys Targaryen did marry a towering Khal, so maybe tall guys are the Mother of Dragon’s type.) Tyrion replied, “As heroes go, he’s quite little.”

Thrones fans have long debated Harington’s height, perhaps because the show is filled with people who are taller than your average actor: Brienne (Gwendoline Christie), the Hound (Rory McCann), the Mountain (Hafthór Júlíus Björnsson) and Hodor (Kristian Nairn) are all known for their generous stature. But such fan speculation has precedent: For decades, fans have tried to guess Tom Cruise’s true height. In 2015, Mystery Show podcast host Starlee Kline went on a mission to discover Jake Gyllenhaal’s height, which culminated in a segment on Conan in which she actually measured the actor.

In the Thrones world, jokes about Harington being short are just some of the nods that the writers have made to the meme culture that now surrounds the show. When Davos reunites with Gendry he says that he thought the blacksmith might “still be rowing,” referencing a joke that Gendry actor Joe Dempsie tweeted years ago. And after fans skewered Daenerys for her obsession with listing her many titles on the show, the writers wrote in a joke where Davos replies to Tyrion’s long list of honorifics for Daenerys with a very brief introduction for Jon.

The writers are likely skewering fans’ obsession with Jon’s stature by writing in these recurring quips. Then again, the one person who may matter most — Daenerys — doesn’t seem to mind. 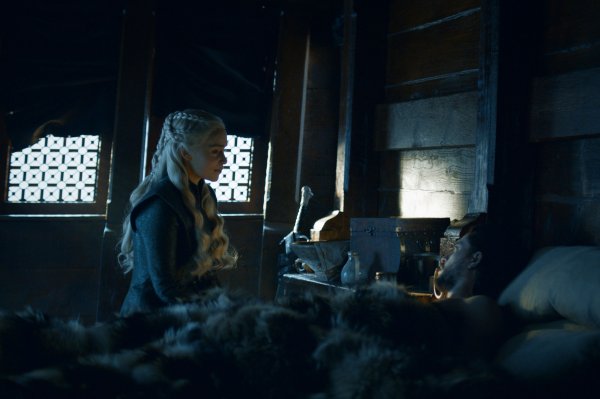 Here's the Epic Title of Game of Thrones Season 7 Finale
Next Up: Editor's Pick