In Sunday’s penultimate episode of the seventh season of Game of Thrones, Jon Snow and his crew of some of Westeros’ best fighters were surely doomed before Daenerys Targaryen and her dragons saved them.

While Thrones fans didn’t take issue with the ridiculousness of Jon Snow’s mission to capture a wight from an army of White Walkers with little protection, they were quick to criticize the time lapse seen in the episode. Most notably, they criticized the speed in which a raven flew south to Dragonstone to request Daenerys’ help after Gendry, Robert Baratheon’s bastard son, somehow ran back to Eastwatch with seemingly no issue.

As a show where massive dragons fly, Faceless Men dwell and Bran Stark has become an all-knowing Three-Eyed Raven, the director of the episode, “Beyond the Wall,” told the New York Times that being concerned about the speed of a raven should not be a priority.

“I’ve only looked at one review online, and it was very much concerned with the speed of the ravens,” Alan Taylor told the Times. “I thought, that’s funny – you don’t seem troubled by the lizard as big as a 747, but you’re really concerned about the speed of a raven.”

“But that said, Gendry’s a really great runner,” Taylor added. “Ravens go super fast. And who’s to say how much time passes on that island, since it’s always sort of an eternal twilight north of the Wall? With those three ideas in mind, I think we can lay the timing concerns to rest.” 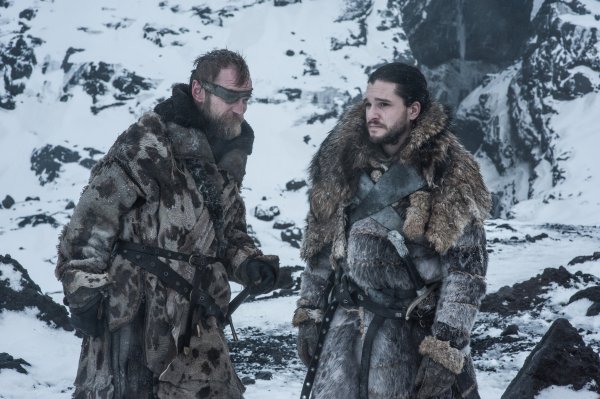 Beric Dondarrion's Speech About Death Could Change Jon Snow's Future on Game of Thrones
Next Up: Editor's Pick