Florida's Textbooks Are a New Battleground in America's Fight Over Facts

Mike Mogil doesn’t believe climate change is caused by humans. The 72-year old former National Weather Service meteorologist says global temperatures have been fluctuating for millennia, and recent extremes could very well have nothing to do with mankind. Now, he wants to make sure Florida’s public school students get the same perspective.

Mogil is one of dozens of Florida residents who plan to file objections to school textbooks under a new state law that recently went into effect. The law, the first of its kind in the nation, allows any state resident — even those like Mogil who aren’t public school teachers and don’t have children in public school — to formally challenge classroom instructional materials. The potential grounds for a challenge are broad. Materials that are inaccurate, unbalanced, age-inappropriate, inflammatory or pornographic could face removal from the classroom.

To Mogil, who is a member of the Florida Citizens’ Alliance, the conservative group that helped write the bill, “objective” means that any textbook including climate change information should leave open the possibility that humans are not at fault, even though that goes against the overwhelming scientific consensus that global temperatures are rising and carbon emissions by humans are to blame. “You shouldn’t start off with a political agenda from either side,” he says. “We’re all taxpayers in one form or another, and I would like to have a say in how that money is being spent.”

The hotly debated Florida textbook law — which passed the state House easily and the Senate narrowly before gaining Republican Gov. Rick Scott’s signature in June — aims to give all state residents a say in public school textbooks while creating a clearer process for vetting challenges to instructional materials. Supporters see it as a way to insert their viewpoints into what students are learning, to counter what they see as a liberal, multicultural, pro-environmental bias in schools. The ACLU of Florida, the Florida Library Association and many scientists throughout the country have voiced opposition to the law, saying it gives religious organizations and ideologically motivated groups too much potential influence on public education.

“This could be really misused by a lot of people to the detriment of the job of educating our kids,” says Richard Grosso, a Florida attorney and Nova Southeastern University law professor who believes the new law is unnecessary. He is concerned that already-underfunded districts will have to spend time and money hearing textbook challenges even if they’re “completely frivolous.”

But Republican state Rep. Byron Donalds, who voted for the bill, says it’s essential to ensure students hear multiple perspectives on issues like climate change, which he sees as “a matter of debate, not settled science.”

“You always arrive at the best product when people have input into the decision,” Donalds says.

States across the country have long grappled with how to determine what is taught in schools and who gets to decide, with controversies ranging from whether to teach evolution to whether abstinence is the only form of sex education. In 2014, Florida joined other states in allowing parents a say in all the books their school district taught. But that law did not include a mandatory hearing process, and parents complained their objections were not heard. It also did not give residents who aren’t parents a way to raise concerns about textbooks.

The new law aims to address these issues by allowing anyone to object to textbooks and by delineating a new process for hearing those objections. Each one will go to an “unbiased and qualified” hearing officer who will be appointed by each school district. That officer will then make a recommendation to the local school board, which will make a final decision. The board could decide not to allow a particular chapter of a textbook to be taught, for example, or could require that supplementary material be added to the curriculum, says Collier County School Board member Erika Donalds, who’s married to Rep. Donalds, and, like her husband, supports the law.

The law, though, leaves several open questions, including who can be appointed a hearing officer and whether the position is paid or volunteer. Each school board will also determine its own process for residents to file complaints. Florida school board members from Miami-Dade and Collier counties say their districts have yet to establish these processes, and likely won’t do so until someone files an objection to a textbook in their district.

That hasn’t happened yet, largely because supporters of the law have not yet picked their initial test cases. In the meantime, the Florida Citizens’ Alliance urged its 20,000 supporters to become “textbook reviewers” by taking a three-month, mostly online training course run by Truth in Textbooks, a Texas-based conservative group that encourages its volunteers to oppose what it calls a “pro-Islam/anti-Christian” bias in history books. The Truth in Textbooks course doesn’t officially give participants a leg up in textbook objections, but the Florida Citizens’ Alliance hopes the training will add credibility to members’ challenges to school boards this fall.

Scientists, too, are concerned about the implications of the law, particularly in a state where coastal communities are threatened by accelerated sea-level rise caused by global warming.

“Today’s students are going to be the ones doing something about sea level rise, and teachers are the ones there in the classroom educating the students,” says Alana Edwards, who trains teachers on climate change instruction at the Florida Atlantic University. “If they don’t get the proper materials, that’s a problem.”

Mogil, the former meteorologist, spent the summer teaching about weather and sharing his views on climate change with about 30 middle and high school students at a summer camp he runs in Naples, Fla. He hopes that by offering a different view than what the kids learn in school, and by challenging textbooks under Florida’s new law, he will teach students to be skeptical, like him, of widely accepted knowledge.

Correction: The original version of this story misspelled the name of the ACLU’s Kara Gross. 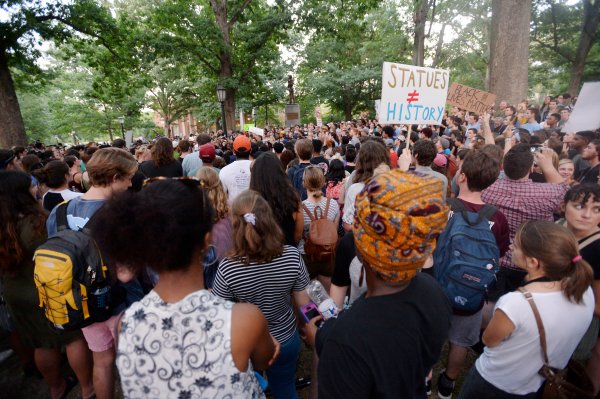 Hundreds Protest Confederate Monument at UNC
Next Up: Editor's Pick