See What the Solar Eclipse Looked Like From NYC

A solar eclipse that started in Oregon and moved eastward before ending in South Carolina was visible in every part of the U.S. on Monday. The rare phenomenon brought skygazers out to places like Wyoming, Idaho and Missouri — states that were in the eclipse’s path of totality. In New York City, viewers got a partial view of the eclipse, and gathered in the city’s public parks and sidewalks to catch the moon-covered sun.

The solar eclipse marked the first time since 1979 that an eclipse was visible in the contiguous U.S. From Times Square to the Empire State Building, New York’s landmarks filled with people eager to see the crescent-shaped sun as it was partially obscured by the moon. Check out photos of the eclipse from New York below.

Viewers gazed at the sky on the Empire State Building’s observation deck, looking a lot like the people who crowded the area in 1932 to look at a solar eclipse — only with slightly updated glasses.

People watch the solar eclipse from the observation deck of The Empire State Building in New York City on Aug. 21, 2017.
Brendan McDermid—Reuters
Eclipse watchers squint through protective film as they view a partial eclipse of the sun from the top deck of New York's Empire State Building Aug. 31, 1932.
AP
More Must-Read Stories From TIME 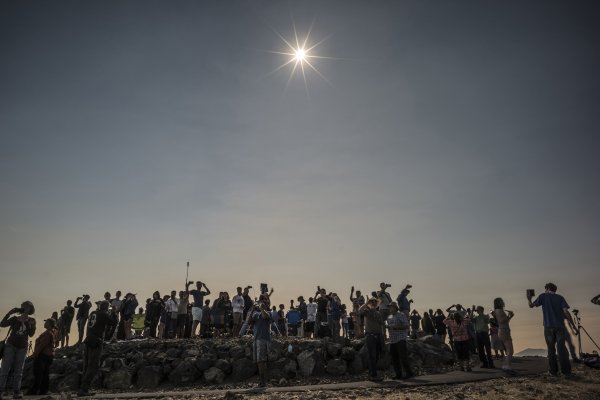 See What the Solar Eclipse Looked Like From Oregon
Next Up: Editor's Pick