Before Westeros’ magnificent seven were ambushed by the army of the dead in Sunday’s episode of Game of Thrones, the group — which included Jon Snow, Tormund, Jorah Mormont, Gendry, Beric Dondarrion, Thoros of Myr and the Hound — spent some time getting to know each other.

Jon kicked off the trek beyond the Wall by offering to return Longclaw — the ancestral Valyrian steel sword of House Mormont — to Jorah. However, he soon found himself walking beside Beric, which led to a meaningful conversation about the significance of their resurrections.

To refresh your memory, Jon was brought back to life by Melisandre following his murder at the hands of his Night’s Watch brothers while Beric was resurrected six separate times by Thoros after originally being killed by the Mountain.

Despite the fact that he once told Arya that every time he comes back he’s a “bit less,” Beric — a true believer in the Lord of Light — has long seemed relatively at peace with the idea that his fate is out of his control. Jon, on the other hand, has consistently struggled to accept that he is apparently destined to fulfill some greater purpose.

“There’s a brilliant line when Melisandre asks: ‘What did you see?’ And he says: ‘Nothing, there was nothing at all,'” Harington told Entertainment Weekly, referring to Jon’s account of the afterlife — or rather, lack thereof. “That cuts right to our deepest fear, that there’s nothing after death. And that’s the most important line in the whole season for me. Jon’s never been afraid of death, and that’s made him a strong and honorable person. He realizes something about his life now: He has to live it, because that’s all there is. He’s been over the line and there’s nothing there. And that changes him. It literally puts the fear of god into him. He’s seen oblivion and that’s got to change somebody in the most fundamental way there is. He doesn’t want to die ever again. But if he does, he doesn’t want to be brought back.”

However, Beric’s insight into their continued survival seemed to finally give Jon a way to process what happened to him. After Jon explained that he doesn’t serve the Lord of Light because he doesn’t understand what the Lord wants from him, Beric offered a perspective on their situation that seemed to resonate with Jon’s deep-rooted commitment to honor and duty.

“I don’t think it’s our purpose to understand. Except one thing — we’re soldiers,” Beric told him. “We have to know what we’re fighting for. I’m not fighting so some man or woman I barely know can sit on a throne made of swords…[I’m fighting for] life. Death is the enemy. The first enemy and the last…The enemy always wins. And we still need to fight him. That’s all I know. You and I won’t find much joy while we’re here, but we can keep others alive. We can defend those who can’t defend themselves…Maybe we don’t need to understand any more than that. Maybe that’s enough.”

This message appeared to strike a chord with Jon, who echoed a line from the Night’s Watch vows that he once swore to spend his entire life upholding. “I am the shield that guards the realms of men,” he replied.

With Thoros dead, Beric is officially on his last life, meaning his ultimate destiny will almost certainly soon be revealed. As for Jon, evidence continues to pile up that he is in fact the Prince That Was Promised. 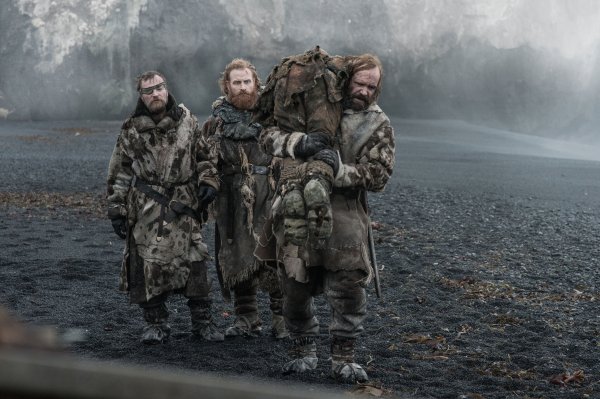 Watch the Heart-Pounding Trailer for Game of Thrones' Season 7 Finale
Next Up: Editor's Pick