As millions of Americans look up to the sky to catch the total solar eclipse on Monday, or watch TIME’s live broadcast, astronauts on the International Space Station are gearing up for multiple views of the phenomenon.

The crew on the Expedition 52 will not be in the eclipse’s path of totality, but will see a partial view of the solar eclipse three times as they orbit the Earth from the station. The International Space Station will pass through moon’s penumbra shadow, giving the crew a partial view each time. Since the station won’t pass through the moon’s umbra, the astronauts will not see the total eclipse, according to NASA. Each astronaut will have their cameras outfitted with special filters so they can photograph the solar eclipse aboard the station.

“We get three different looks at the eclipse,” astronaut Randy Bresnik said during a NASA Facebook session on Friday. “Because we are going around the Earth every 90 minutes and about the time it takes the sun to cross the U.S., we’ll get to see it three times.”

The International Space Station will first see the eclipse just before it begins in the U.S. The total solar eclipse is set to start in Lincoln Beach, Ore. around 9:05 a.m. PST. The crew should see a partial eclipse with about 38% of the sun obscured by the moon.

The second time, the International Space Station will see about 43.9% of the sun covered by the moon. Astronauts will also see the moon’s shadow as it passes over parts of Illinois and Kentucky.

“As we come around the Earth again, this time on the second pass, we will actually cross over,” Bresnik said. “We will be north of Lake Huron in Canada when we will be able to see the umbra, or the shadow of the moon, of the eclipse on the Earth. [Mission Control is] telling us around Tennessee-Kentucky, the western side of those states, that area, that we will be able to see it close to the horizon.”

On its third orbit, the crew will see the eclipse as it passes over the East Coast. In the partial eclipse, 84% of the sun will be covered by the moon at its maximum point. The moon’s shadow will not be visible. 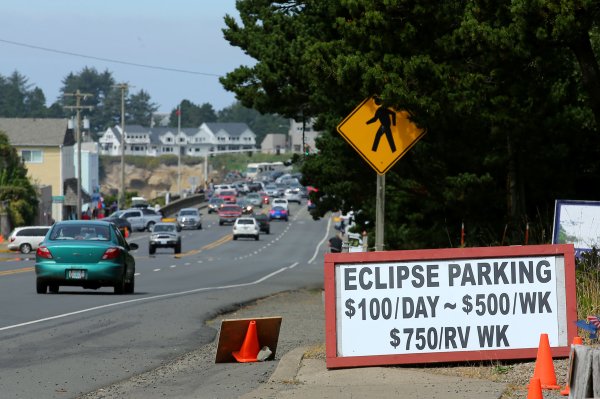 People Skipping Work for the Solar Eclipse Could Cost Their Employers $700 Million
Next Up: Editor's Pick