The French are generally right about wine, cheese and pastry. They have also always been right about Jerry Lewis, who died Sunday at age 91, his publicist confirmed to the Associated Press

Lewis is probably best known to people under 70 as a film actor: He was the star, as well as the writer-director, of pictures like The Nutty Professor (1963), a potty work of genius in which he played the dual roles of a nerdy scientist and his alter-ego, Buddy Love, a suave, rude Ratpack-style lothario. In 1982 he appeared, opposite Robert De Niro, as kidnapped comedy kingpin Jerry Langford in Martin Scorsese’s King of Comedy. Lewis’s MDA Labor Day Telethon, which he hosted to raise money for the Muscular Dystrophy Association, was virtually unavoidable late-summer-holiday television from 1966 to 2010. More recently, Lewis continued to perform live, selling out shows even at age 90.

And most people know that, as part of his long career as a writer-director as well as an actor, Lewis directed and starred in an ill-advised film in 1972 called The Day the Clown Cried, about a clown who accompanied children to the gas chambers in Nazi concentration camps. The film has never been shown, on Lewis’ orders, but its name alone has always served as a handy punch line for anyone who wanted to cut Lewis down to size. But maybe we should be thinking of that unseen film as the pinnacle of risk-taking in a performer who was always willing to take chances, often physically dangerous ones. The pratfalls and silly walks that Lewis devised to delight us, year after year and movie after movie, resulted in back injuries—not to mention addiction to painkillers—that essentially led to lifelong pain. Being funny hurts.

But you’d never know it to watch Lewis, in the movies he made both with and without his famous partner, Dean Martin. Although Lewis’ comedy has come to be better appreciated in recent years, for decades people who were clearly missing the point considered it too broad, too brassy, too full of facial mugging. But Lewis was really a musician and dancer rolled into one, even when he was neither playing music or dancing outright. His routines were a glorious rush of improvisatory looseness and seemingly contradictory precision: He’d know intuitively when to cross his eyes or jut his jaw, and if his split-second decisions were as definitive as a well-placed sixteenth note, they also felt wild and a little dangerous, an invitation to reckless freedom and joy.

Even though Lewis was famous for his exaggeratedly squeaky speaking voice, he seldom needed words. In The Bellboy, his ingeniously made 1960 directorial debut (he also wrote and produced), Lewis plays a nonspeaking bellhop named Stanley, bumbling through his job at Miami’s tony Fontainbleau Hotel: When the manager asks him to mind the front desk for a minute, one of the phones placed on it starts ringing. Unable to determine which one it is, Stanley, the rattled naïf, herds them together as if they were bleating sheep. The trailer for the film is a mini delight by itself, in which Lewis depicts, in typically exaggerated fashion, a sarcastic cigar-chomping producer, a disheveled writer missing a tooth and hunched over a typewriter, a director sporting a scar across one eye and growling in a heavy German accent. Even if modern viewers have to make some allowances for racial gags that may not have aged well, Lewis could take any tired stereotype and make it sing.

But to understand Lewis as a performer, it’s essential to grasp the reach, and the brilliance, of Martin and Lewis, a duo that were like rock stars before rock stars even existed. Lewis was born in Newark in 1926. His father was a vaudeville performer, his mother played piano for a radio station: Both performed at resorts in the Catskills, and as a kid, Lewis would join them. As a teenager he developed a routine in which he would mime to phonograph records. This is the act he was shopping around New York City clubs in 1945, the year he met Martin, casually, on the street—the two were introduced by a mutual friend. They became a comedy duo the following year.

If not for that partnership, Lewis would never have become the Jerry Lewis we know. You can see their rapport in the movies they made, like the Frank Tashlin-directed Artists and Models (1955) or Hollywood or Bust (1956), the pair’s final film, made as their partnership, and their friendship, was disintegrating. But the truest revelation of Martin and Lewis’ grandness, together and separately, comes from watching clips from the show that made them stars, The Colgate Comedy Hour. Their formula was repeated seemingly ad nauseam and yet was somehow endlessly funny: Martin, suave, smooth and devilishly handsome, would attempt to croon a song; Lewis, gangly and restless, a hyperactive man-boy, would cut into the moment with a rude noise, an over-the-top grimace or grin, or some other manufactured interruption.

One of the great joys of these routines is watching Martin do his damnedest not to crack up. Sometimes, he would fail, and Lewis would end up laughing, too. This isn’t an example of the dreadful phenomenon of comedians’ laughing at their own jokes. It’s something both more joyous and more mysterious, an instance of the audience being let in on fun in the best possible way. Martin was Lewis’ ideal partner and perfect audience rolled into one.

The Martin and Lewis partnership lasted only 10 years. Professional jealousy and assorted other tensions brought it to an end, bitterly, in 1956, and although the two attempted occasional cordial meetings, the split lasted the rest of their lives. (Martin died in 1995.) The breakup pained Lewis greatly. In his marvelous 2005 memoir, Dean & Me: A Love Story, written with James Kaplan, Lewis recounts the final show the two men performed together, on Tuesday, July 24, 1956, at the Copacabana in New York. It was 10 years to the day after they had first cemented their partnership as a comedy team. “When I awoke on Wednesday afternoon,” Lewis wrote, “I understood how an amputee must feel.”

Lewis could never bear to watch Hollywood or Bust. It’s the only one of his films, he wrote in his memoir, that he hasn’t seen. In 2016, Lewis gave a taciturn on-camera interview to the Hollywood Reporter. Most questions were met with crabby three- and four-word non-answers. When the desperate but patient off-camera interviewer asked if Lewis had a favorite period, or a time when he was happiest, Lewis stalled at first, and then said outright, “When my partner was alive.” The interviewer pressed further: What made it great? “I’ll show you some material,” Lewis continued crossly, as if he couldn’t even believe he had to explain such a thing, “you’ll know.”

In Dean & Me, Lewis wrote very briefly of attending Martin’s memorial. He was grateful, he said, to have missed the burial. “I lost my partner and my best friend. The man who made me the man I am today….I miss him every day I’m still here.” The first time Lewis and Martin performed together as a bona fide team, they drove an Atlantic City audience wild with a makeshift routine they’d scrawled, in eyebrow pencil, on a greasy brown paper pastrami sandwich bag. As of the time he wrote Dean & Me, Lewis still had the bag, stored in a safe-deposit box. Great careers, like great friendships, often have ignoble beginnings, and who can really script their endings? No one knows what Heaven is like, but if it’s got a deli, you can bet there’s a suave, handsome Italian guy there, waiting with a sandwich. He’s also probably trying to keep a straight face. 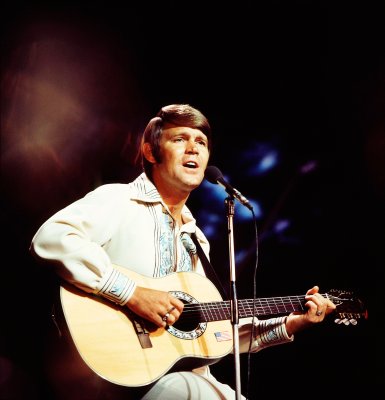 Glen Campbell
Next Up: Editor's Pick