John McCain Completes First Round of Chemotherapy: 'His Resilience and Strength Is Incredible'

U.S. Sen. John McCain (R-AZ) looks on during a news conference to announce opposition to the so-called skinny repeal of Obamacare at the U.S. Capitol July 27, 2017 in Washington, DC.
Justin Sullivan—Getty Images
By Mahita Gajanan

Sen. John McCain has completed his first round of radiation and chemotherapy, his daughter announced on Friday.

The Arizona senator revealed he was diagnosed with glioblastoma, an aggressive type of brain cancer, in July. Medical officials discovered the brain tumor while McCain was undergoing surgery to remove a blood clot from his left eye.

McCain’s office said he would undergo radiation and chemotherapy at the Mayo Clinic in Phoenix while keeping up his work schedule. The 80-year-old senator has said he plans to return to Washington D.C. at the end of Congress’ recess this month.

The senator’s office did not immediately respond to a request for comment. 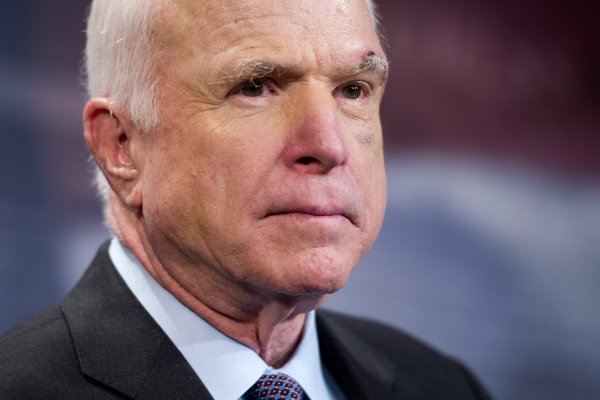 John McCain Thanks Supporters After Cancer Diagnosis: I Am 'The Luckiest Guy on Earth'
Next Up: Editor's Pick