These Are the Victims of the Spanish Terrorist Attacks

The people killed and injured in this week’s terrorist attacks in Spain hailed from 34 countries around the world, and the impact will be felt in every corner of the globe.

On Friday morning, emergency services updated the death toll to 14, announcing that one woman had died after terrorists struck pedestrians in the coastal town of Cambrils in the early hours of the morning. Earlier, a van had been driven through a crowd in the center of Barcelona, killing 13 and leaving scores of people wounded, many seriously.

U.S. Secretary of State Rex Tillerson said on Friday afternoon that one American had been killed in the attack, but no details of the victim’s identity have so far been released.

Three of the fatalities have so far been identified:

This December 2016 photo provided Aug. 18, 2017 shows Bruno Gulotta, at center wearing a black shirt, with his colleagues at their office in Legnano, near Milan, Italy.
Tom's Hardware Italy/AP

Italian retailer Tom’s Hardware confirmed that its employee Bruno Gulotta, a 35-year-old from Legnano in northern Italy, died in the Barcelona attack on Friday morning. He was reportedly on holiday with his wife, Maria, and their two young children.

“A photo from Cannes, one of the Ramblas in Barcelona. And then what no one expects: the death of a young man, father and life partner of the mother of his children,” one of his colleagues wrote in a statement. The company added that they were thinking of his eldest child who was due to start elementary school and his youngest, just seven months old, who “will never know her father”.

The city of Tongeren, where the 44-year-old woman was from, has opened a book of condolences “in solidarity” with her family.

The Belgium national was on holiday in Barcelona with her husband and their two sons, aged 11 and 14, the Guardian reported. Patrick Dewael, the mayor of Tongeren, told Belgian radio that he had presided over her wedding in 2014 and sent his condolences.

Vanbockrijck worked in the local bank, according to local people, and was a football fan.

“Super woman, honey of a mom, everything you want in a friend or colleague! And then she gets taken away from us! Terrible, strength to all colleagues and especially to the family,” one friend wrote.

The 57-year-old man, from Granada, was the first Spanish victim to be identified from the Barcelona attack. Spanish newspaper El Pais reported that his wife was seriously injured in the attack, her niece and a related three-year-old child are also reported to have died.

Raquel Baron Lopez, his niece, tweeted a series of frantic messages to say that she had been searching for him in hospital. But later let her followers know that he had died.

The second Italian who died was identified by the Italian foreign ministry as 25-year-old Luca Rosso, who was on holiday with his fiancée. She is reported to be injured but not in a serious condition. He is from Bassano Grappa in the northern province of Treviso.

Both Russo and his girlfriend were reportedly volunteers at the Green Cross and local media is reporting that he was an engineering graduate.

His sister wrote an hour before he was identified as dead: “help me bring him home, please.”

A young child has been confirmed as dead but has not yet been identified. The child, from Rubi in Barcelona, was taken to San Pau hospital but died shortly after arriving. 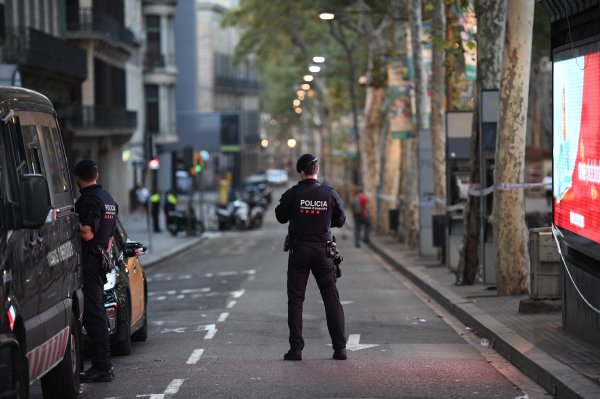 How the Terrorist Attacks in Spain Unfolded Over a Chaotic 12 Hours
Next Up: Editor's Pick