Tina Fey Returns to SNL With Her Own Charlottesville Coping Strategy: Sheet Cake

“I know a lot of us are feeling anxious and asking ourselves, ‘What can I do?’” Fey said. “I would urge people this Saturday instead of participating in screaming matches and potential violence, find a local business you support. Maybe a Jewish bakery or an African-American run bakery? Order a cake with the American flag on it and… just eat it.”

Fey was then presented with a cake, continuing her point as she began to tuck into the mammoth dessert. “Next time you see a bunch of white boys in polo shirts screaming about ‘taking our country back,’ and you want to scream, ‘It’s not our country, we stole it from the Native Americans … don’t yell it at the Klan, yell it into the cake.”

A number of notable figures, including Harry Potter author J.K. Rowling, also chimed in to applaud Fey’s response, in which she did not hold back from bashing President Trump, House Speaker Paul D. Ryan (“you’re suppose to be the cool, young congressman but you don’t know how to @ someone on Twitter?”) and right-wing pundit Ann Coulter (who she described as a “yard-sale Barbie”).

“In conclusion,” Fey continued. “I really want to say, to encourage all good, sane Americans to treat these rallies this weekend like the opening of a thoughtful movie with two female leads. Don’t show up. Let these morons scream into the empty air.” 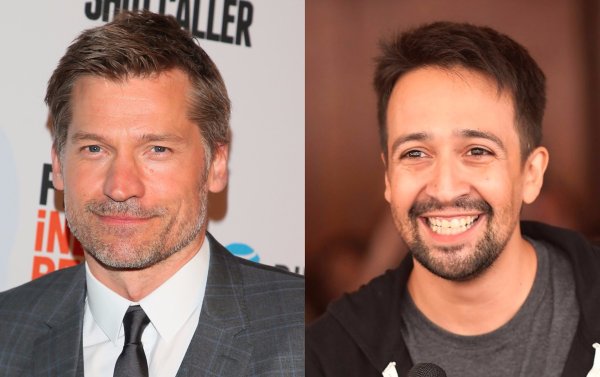 Are Jaime Lannister and Lin-Manuel Miranda Having the Bromance We Never Knew We Needed?
Next Up: Editor's Pick