Following Jon Snow’s miraculous return from beyond the Wall in Sunday’s episode of Game of Thrones, the King in the North was brought to one of Daenerys’ ships to recuperate. As Dany watched, his men then stripped off his wet clothing, exposing the scars from his murder at the hands of his Night’s Watch brothers. It was at this moment that she seemed to realize that Davos’ claim that Jon had taken a knife in the heart for his people was not just a figure of speech.

But when he woke up, Daenerys had her own secret to share. “The dragons are my children,” she told him, mourning Viserion’s death. “They’re the only children I’ll ever have. Do you understand?”

In George R.R. Martin’s A Song of Ice and Fire series, Daenerys’ son Rhaego is stillborn after she enters the tent in which Mirri Maz Duur is performing a blood magic ritual on Khal Drogo. The witch then implies to Dany that she is infertile after she discovers that Drogo has been left in a catatonic state.

“When the sun rises in the west and sets in the east,” Mirri Maz Duur tells her after she demands to know when Drogo will be back to normal. “When the seas go dry and mountains blow in the wind like leaves. When your womb quickens again, and you bear a living child. Then he will return, and not before.”

Mirri Maz Duur delivered a similar prophecy in the show, but the line about Daenerys’ womb was left out.

Daenerys’ confession to Jon was the second time in Sunday’s episode that her supposed infertility was referenced. The first came during the conversation she had with Tyrion concerning succession.

However, judging by the uncertain nature of prophecies in the world of Thrones, Dany’s belief that she can no longer have children may not be correct. If a romantic relationship develops between her and Jon — which seems probable despite their family ties — she could still be proven wrong.

After all, as Jorah hinted to Jon before their battle with the dead, his Valyrian steel sword Longclaw needs to be passed down to someone. 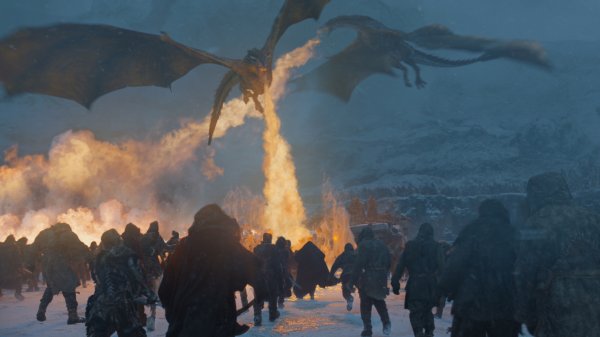 What That Major Game of Thrones Twist Means for Daenerys and Her Dragons
Next Up: Editor's Pick