Tensions on the Korean peninsula remain high, as U.S. and South Korea began its latest series of war games on Monday, but right now the outbreak of war is looking less likely. Kim Jong Un’s regime in North Korea announced that it has opted for a wait-and-see approach with Guam, after U.S. Defense Secretary Jim Mattis warned that any missile attack directed toward a U.S. territory “could escalate into war very quickly.” That’s 21st century diplomacy in action. Here’s a quick look at some of the ways the current U.S.-North Korea détente can go sideways:

1. The wild card in the White House

For the last 60+ years, the unpredictable element in the U.S.-North Korea standoff has always hailed from Pyongyang. But Donald Trump is a different kind of president. He has at times demonstrated an astonishing thin skin—and given that the only thing impoverished North Korea has in spades is bellicose rhetoric, that’s a problem.

More worryingly though is the fact that if ever there was a seeming slam dunk foreign policy win for Trump, it’s North Korea. 62 percent of Americans believe Kim Jong-un poses a serious threat to the U.S. (up from 48 percent in March); 50 percent favor military action against North Korea if they continue testing missiles that can reach the U.S. For a man who remains conspicuously short of signature victories more than 200 days into his administration (and has a penchant for lurching from one PR disaster to another), taking a strong stand against North Korea might become more appealing day by day. And we haven’t even gotten to the Mueller investigation yet, which will most probably have Trump desperate to change the narrative any way he can.

2. North Korea’s got something to prove

Conventional analysis of Kim Jong-un often begins and ends with the premise that he’s crazy. That may very well be, but he’s shown himself to be a pragmatist when it comes to foreign policy. Kim saw what happened to Saddam Hussein and Muammar Gaddafi, strongmen who bluffed a big nuclear game. He has no intention of following suit.

Menacing Guam was never going to give Kim the appearance of strength he desperately needs to stay in power though. Guam is heavily fortified; 6,000 U.S. troops are stationed there, as are THAAD missile defense systems and Aegis destroyers. It’s possible those defense systems are capable of shooting down missiles directed towards Guam—instantly transforming Kim’s threat from bold gambit to laughable miscalculation.

Then there’s the fact that China, North Korea’s longtime benefactor and main lifeline to the outside world, seems particularly unnerved by North Korea’s recent actions and fears it could destabilize the global status quo. It joined the UN Security Council’s latest round of sanctions against Pyongyang, and early reports suggest it’s actually following through this time. As a reminder, China accounts for more than 90 percent of North Korea’s trade volume in addition to providing the bulk of its food and energy. North Korea feeling threatened by the U.S. is one thing; North Korea feeling threatened by China is a completely new ball game, and one that makes Kim more likely to lash out.

Not that China had much choice but to turn the screws on North Korea. Trump has been floating the possibility of a trade war with China for months now, but it was only this week that Trump took any concrete steps by announcing the launch of a broad investigation into China’s alleged theft of American intellectual property. Had China not signed on to those Security Council sanctions, Trump would have probably taken an even harder line.

Ideally, China would like a stable world to continue its ascent to world power status. Given that, China has no good options when it comes to dealing with North Korea. It doesn’t want to get into a showdown with the U.S., so doing nothing is not a viable long-term option from here on in. But it can’t just cut North Korea off—there’s no telling what trouble Pyongyang will cause if it suddenly finds itself unmoored. In all likelihood, Beijing’s dream of a stable global environment while it focuses on building up economic initiatives like its ambitious One Belt One Road project suddenly vanish. At the same time, it can’t push the Kim regime too far lest it collapse, flooding China with desperate North Korean refugees and producing two of China’s worst nightmares: loose nukes and a US military using North Korea’s collapse as a pretext for ramping up its activity in Asia.

So China remains faced with a number of bad options. But it won’t stay that way forever. China’s leadership has shown itself adept to dealing with geopolitical challenges as they come; there will come a time when one North Korea option will clearly show itself to be worse than the others, and Beijing will act. It’s just not clear who that will benefit.

4. South Korea trapped in the middle

Pyongyang already poses an existential threat to South Korea. North Korea has anywhere between 2,500 and 5,000 tons of chemical weapons at its disposal already, and a barrage of artillery (as many as 21,000 pieces) continuously pointed at Seoul; some analysts estimate that amount of firepower could decimate Seoul (population: 10 million) in as little as two hours.

What is new for South Korea is its president, Moon Jae-in. Moon was elected in a special election this past May after his predecessor, the conservative Park Geun-hye, was impeached. During the last two conservative presidential administrations (Park and Lee Myung-bak), South Korea had followed America’s lead and taken a hardline against Pyongyang, believing that isolating North Korea could weaken it. Having seen the wonders that plan has worked, Moon has opted to revive South Korea’s “sunshine policy” from the late 1990s/early 2000s of constructive engagement with North Korea, which includes reestablishing lines of communication with Pyongyang (a proposal 77 percent of South Koreans support) and floating the possibility of economic cooperation with the Hermit Kingdom.

But improving relations with North Korea is far from simple. South Korea also has to balance its relationships with China and the U.S. China is a critical economic partner for South Korea; China accounts for almost a quarter of all South Korea’s trade, and it is the single largest importer of South Korean exports. At the same time, South Korea has relied on American military protection since the 1950s, and given the part of the world it’s situated in, it’s smart to have the world’s foremost military power in your corner. In fact, under U.S. President Barack Obama and South Korean President Park, the two countries agreed that the U.S. would install its THAAD anti-missile system in the country—a move China hates for fear that undercuts its own military leverage in Asia and that the technology could possibly be used to spy on their own military maneuvering. China has already responded with sanctions against select South Korean firms doing business in China and threatened more if THAAD’s deployment continues—which Moon has said it will. And all this without South Korea doing much of anything beyond remaining North Korea’s easiest target.

5. A problem that defies solutions

To recap: the U.S. demands North Korea stop developing nuclear weapons and missiles Pyongyang keeps threatening to use on the U.S. North Korea continues to develop nuclear weapons and missiles to ensure its survival against an enemy it’s so terrified of it keeps threatening to nuke it. China would like things to remain relatively calm and unchanged, and South Korea just want to be left alone (Japan too). If that wasn’t bad enough, consider the principal actors involved: Donald Trump, Kim Jong-un, Chinese president Xi Jinping (who’s heading into a political transition this fall, and though he’s widely expected to continue on as president, the majority of China’s other decisionmakers are expected to be swapped out under Communist Party rules), and a South Korean president who hasn’t been in the job for even six months yet.

North Korea may be the single most difficult geopolitical challenge the world faces. Plenty of big time powers want opposing things, and all of them fear taking decisive action will leave them worse-off in the long run. Yet the longer no one does anything, the longer the problem festers, and at a certain point someone desperate will act, forcing everybody’s hand. There’s always a chance that cooler heads prevail and traditional diplomacy will work, but the world just hasn’t had that type of luck lately. 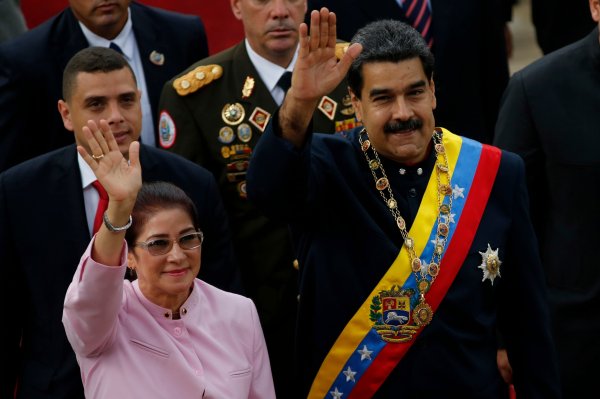 5 Reasons Why Venezuela's Nicolas Maduro Won't Last Much Longer
Next Up: Editor's Pick