Why Spain Has Once Again Become a Target for Jihadists

The Islamic State has claimed credit for a van attack in Barcelona that left 13 dead and more than 100 injured on Thursday, the Associated Press reports. While ISIS’ involvement has not yet been independently confirmed, the episode appears to mark the return of Islamic terrorism to Spanish territory after years without a serious incident.

Hours after the Barcelona attack, an Audi A3 rammed into pedestrians in Cambrils, a seaside town about 70 miles southwest of Barcelona, killing one person. The perpertrators were reported to have been wearing fake explosive belts.

They are the latest in a recent spate of vehicular attacks in Europe, starting with the 2016 attacks in Nice, France. Together, automobiles being used as a weapon have killed more than 100 people in London, Berlin, Nice and Stockholm, Reuters reports.

This is the first time Spain has come under a major terrorist attack in over a decade, but it is no stranger to Islamic terrorism. The 2004 Madrid train bombings, carried out by a group of North African extremists, killed 191 people and injured nearly 2,000 after 10 devices packed with dynamite and nails exploded in four trains heading to the Spanish capital. The al-Qaeda inspired attack was the worst terrorist incident in modern European history.

The country responded by beefing up its counter-terrorism apparatus. “We have learned from our experience and mistakes” Alberto Bueno, an expert in Spanish defense policy at the University of Granada, tells TIME. “Security agencies have since focused on a preventative approach to stop radicalization since 2004.” Spain have conducted around 170 operations and made some 700 arrests, and dozens of convictions, against suspected jihadist. Until Thursday, authorities had been effective in thwarting attacks ahead of time: In 2008, for example, officials prevented a Madrid-inspired metro attack planned by suspects linked to Pakistan’s Taliban.

Meanwhile, xenophobia in Spain is comparatively low compared to the rest of western Europe. Despite being one of the top five E.U. states in terms of its Muslim population — which is about 2.1 percent — the number of nationals or residents to have become foreign fighters in Syria and Iraq are considerably lower. Only around 150 Spaniards are estimated to have traveled to Syria, compared to 1,200 from France. The country is also better intergrated. “Here we don’t have ghettos as they do in France” a police chief said in July to El Pais. “The integration of the Muslim population is greater, and there is an incipient second generation. The radicalization is not so great. If there were 100% integration, the phenomenon would not exist.”

Yet that has changed over the past few years. The country has been a partner in the U.S.-led coalition against ISIS. It has also been taking part in military missions against al-Qaeda in Mali and Iraq. Over the last year, Bueno says, Spain was mentioned at least 45 times in ISIS propaganda. This has been attributed to the country holding a special place in Islamic extremists’ ideology because much of its territory was once under Muslim rule between the 8th and 15th century. “It is seen by many [ISIS] ideologues as a natural territorial part of the end-state caliphate and currently under direct occupation by infidels” Ben Rich, lecturer on international relations at Curtin University, writes in the Conversation.

This has led to an uptick in jihadist activity. In April, police arrested nine suspected members of a jihadi group, believed to have links to the suspects arrested following the 2016 Brussels airport and subway attacks. More recently, authorities caught a suspect in Mallorca who was planning to carry out a knife attack, which, according to the Local Spain, followed “the modus operandi of the recent London Bridge attacks in which eight people were killed and more than 40 injured.”

Catalonia, the region where Barcelona is located, is also where Mohamed Atta and Ramzi Binalshibh, who helped plot the Sept. 11, 2001 attacks, met two months before the events to finalize details, according to the Spanish think tank Elcano Royal Institute.

Bueno says these places, as well as the enclave of Ceuta and Melilla on the northern coast of Africa, have become the country’s “hotspots of radicalization.” He explains that this is caused by the proliferation of Salafist groups in Catalonia and the big number of second generation immigrants who are “looking for an identity and cause to fight for,” he says. 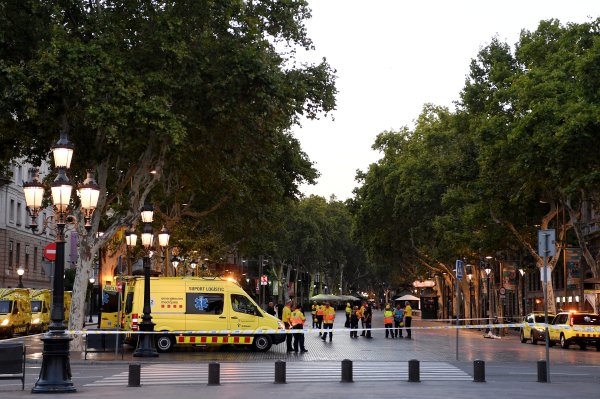 Here’s Why People Are Posting Cats in Response to the Barcelona Attack
Next Up: Editor's Pick