Historians: Robert E. Lee and George Washington Are Not Equivalent

At a contentious press conference on Tuesday, President Trump argued that if statues of Lee and other Confederates were taken down, it would be a slippery slope to removing Washington and Thomas Jefferson from the public square. His personal attorney, John Dowd, later circulated an email arguing that Washington and Lee were equivalent.

“You cannot be against General Lee and be for General Washington,” the email said, according to the New York Times. “There literally is no difference between the two men.”

It’s true that both men were Virginians, slaveowners and military generals. They were even sort-of related: Lee was the son of Washington’s most famous eulogist, Henry “Light Horse Harry” Lee, who fought during the American Revolution and famously characterized Washington as “First in war, first in peace, and first in the hearts of his countrymen.” Robert E. Lee also married Mary Custis Lee, the daughter of Washington’s adopted son, George Washington Parke Custis.

But historians say the similarities end there. One biographer even argues that Lee missed his chance at greatness, since he sided with residents of his state over the union that Washington fought so hard to create.

On the eve of the Civil War in April 1861, Lee was living at Arlington House (now inside Arlington National Cemetery) and had just finished reading a biography of Washington when an emissary for President Lincoln arrived and asked Lee if he would take command of the Union army.

“He tried to convince Lee that the country looks to him as the representative of the Washington family,” says Jonathan Horn, The Man Who Would Not Be Washington: Robert E. Lee’s Civil War and His Decision That Changed American History. “But Lee turns down that command, and to me, that’s the moment he becomes the man who he wouldn’t be Washington. It puts him at war with Washington’s greatest legacy—and that’s the Union—because he had always been taught that his first loyalty was to Virginia.”

That was a common feeling back then, even if it was odd for Lee, a graduate of a national military school like West Point who fought with the U.S. Army in the Mexican-American War.

“A lot of these guys saw the virtue of the Union in that it allowed the states to do what they wanted to do,” as Douglas Ambrose, a professor of History at Hamilton College, explains. “Nowadays we think of ourselves as primarily Americans who have this secondary citizenship in a state.”

At the same time, Horn points out that there were Virginians who decided to remain loyal to the Union, including Lee’s mentor in the Army Winfield Scott, who thought Lee was making the greatest mistake of his life commanding the Confederate army.

The two men also lived during periods of time that had very different views about slavery. Washington and some other founding fathers believed that slavery was untenable in the long run for economic reasons and would end eventually.

“Washington recognized slavery was so deeply rooted in the U.S. that to end it immediately would cause another war, and that’s not what he wanted because he just finished fighting an eight-year war,” says John Stauffer, professor of English and of African and African American Studies at Harvard University. “So that’s why he said that to end slavery without creating social chaos is to end it gradually.”

Washington freed many of his slaves in his will and left an endowment designed to provide an education and let them stay at Mount Vernon as long as they wanted—an unusual arrangement that was not technically legal, but one that worked because “nobody was going to mess with him,” as Joseph J. Ellis, winner of the Pulitzer Prize in History and author of His Excellency: George Washington, puts it.

Through his wife, Lee also oversaw slaves, who were descended from ones that Washington was unable to set free in his will.

Like Washington, Lee was against slavery in theory but didn’t think it was time to end it yet. As he wrote in an 1856 letter to his wife, “slavery as an institution, is a moral & political evil in any country,” but that only God could free the slaves (or in his words, “How long their subjugation may be necessary is known & ordered by a wise Merciful Providence.”)

By that time, the view that slavery would die of its own accord was no longer popular. Ellis notes that the backbreaking work required to harvest cotton had created a Southern economy that depended on slavery, while Northern states had peacefully and gradually emancipated their slaves, setting up an inherent conflict. Meantime, abolitionist actions like John Brown’s raid on Harper’s Ferry had Lee and other Southerners worried that the institution was at risk, said historian Emory Thomas, author of Robert E. Lee: A Biography.

In the end, historians note that Washington served as commander of the Continental Army, presided over the constitutional convention and became the first president, while Lee fought in rebellion against the United States.

“A democracy depends upon the losers accepting the will of the majority,” Stauffer says. “Confederates didn’t do that. They lost the election and they left.” 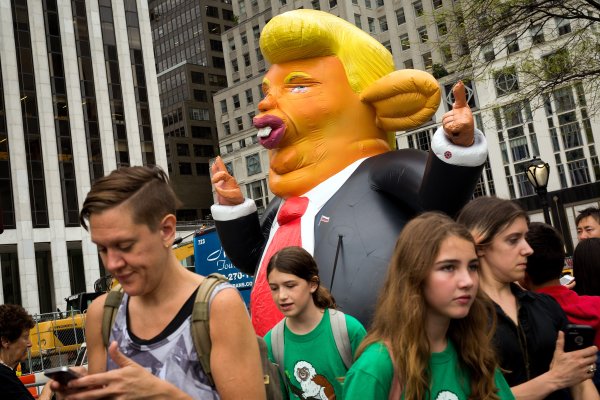 The Man Behind the Big Inflatable Donald Trump Rat
Next Up: Editor's Pick