President Donald Trump doubled down Thursday on opposing the removal of “our beautiful” Confederate statues and monuments from public spaces, making clear he has no intention of backing down amid a torrent of widespread criticism over his response to racially-charged violence last weekend in Charlottesville, Va.

Sad to see the history and culture of our great country being ripped apart with the removal of our beautiful statues and monuments,” Trump said in a series of morning Twitter posts. You can’t change history, but you can learn from it. Robert E Lee, Stonewall Jackson – who’s next, Washington, Jefferson? So foolish! Also the beauty that is being taken out of our cities, towns and parks will be greatly missed and never able to be comparably replaced!”

Trump has endured bipartisan criticism this week for sympathizing with the white nationalist protestors who rallied in Charlottesville, one of whom police say ran his car into a crowd of counter-protesters, killing one person and injuring more than a dozen others. In his tweets, Trump made an argument that white nationalist groups themselves have used for keeping Confederate monuments in public.

Trump has compared Confederate Generals Lee and Stonewall Jackson to Presidents George Washington and Thomas Jefferson because Washington and Jefferson were both slaveowners. But historians have scratched their heads at his recent comments drawing equivalency between two founding fathers of the U.S. and two Generals who rebelled against the country.

Meanwhile, descendants of the Confederate generals Trump listed have come out against the violence and in support of moving their ancestors’ statues.

The great-great-grandson of Robert E. Lee, in an interview with CNN earlier this week, condemned the violence in Charlottesville and said it would be “fine” for cities to remove their Confederate statues if that was their choice. Two great-great-grandsons of Stonewall Jackson also called on their town of Richmond, Va. to remove all Confederate statues.

“Confederate monuments like the Jackson statue were never intended as benign symbols,” they wrote in a letter published by Slate. “Rather, they were the clearly articulated artwork of white supremacy.” 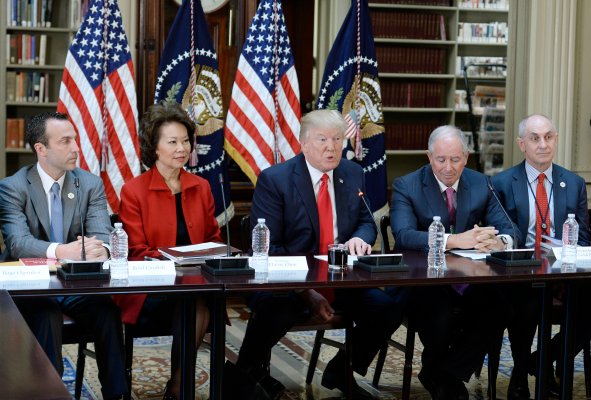